Where to Go Dog Sledding Near Helsinki 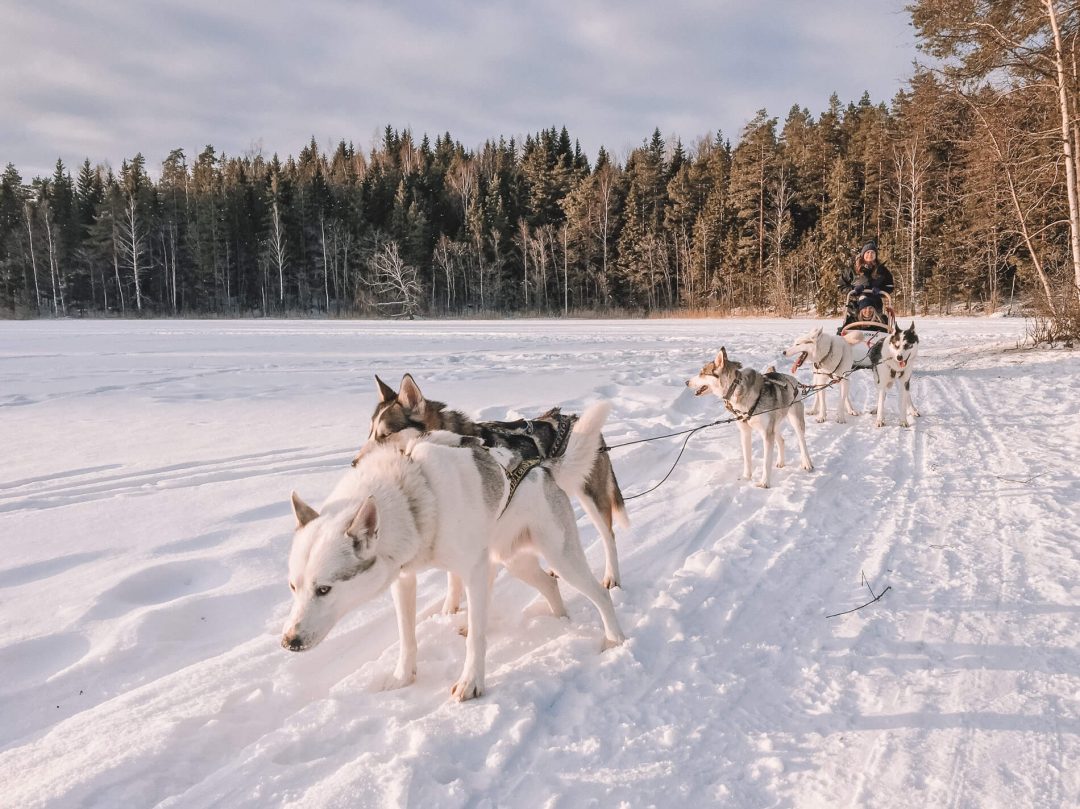 After a solid couple of hours getting to know Ulpu and her white Finnish reindeer, I prepare to say goodbye as she slows her car down to drop me off. It’s almost time to go back to Helsinki, however, I’m fixated on something – it’s just, I swear the man driving the 4×4 in front of me has a husky tour logo on the side of his vehicle and it’s something I’ve wanted to try for a long time. 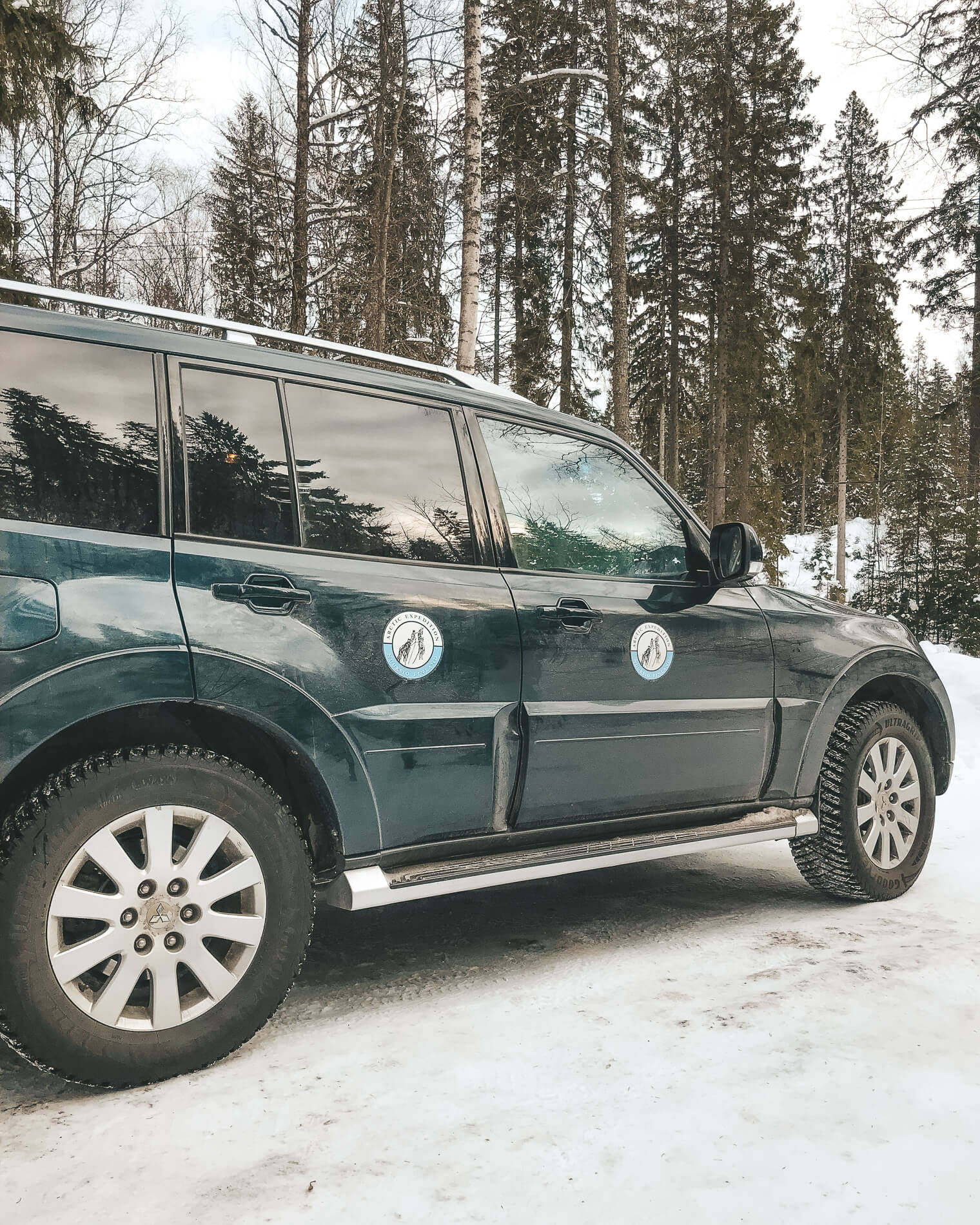 This is the moment where I realise that I have two options. Continue my day, as usual, take the bus and train back to Helsinki and be glad that I got to meet the reindeer. OR, I can spend a ridiculous sum of money, finally get to tick another bucket list experience off the list, and go dog sledding near Helsinki.

The rest is history. Taipo winds his car window down and after a quick exchange and realising I’ll be hundreds out of pocket, we make a deal that I can join the next tour in one hour. 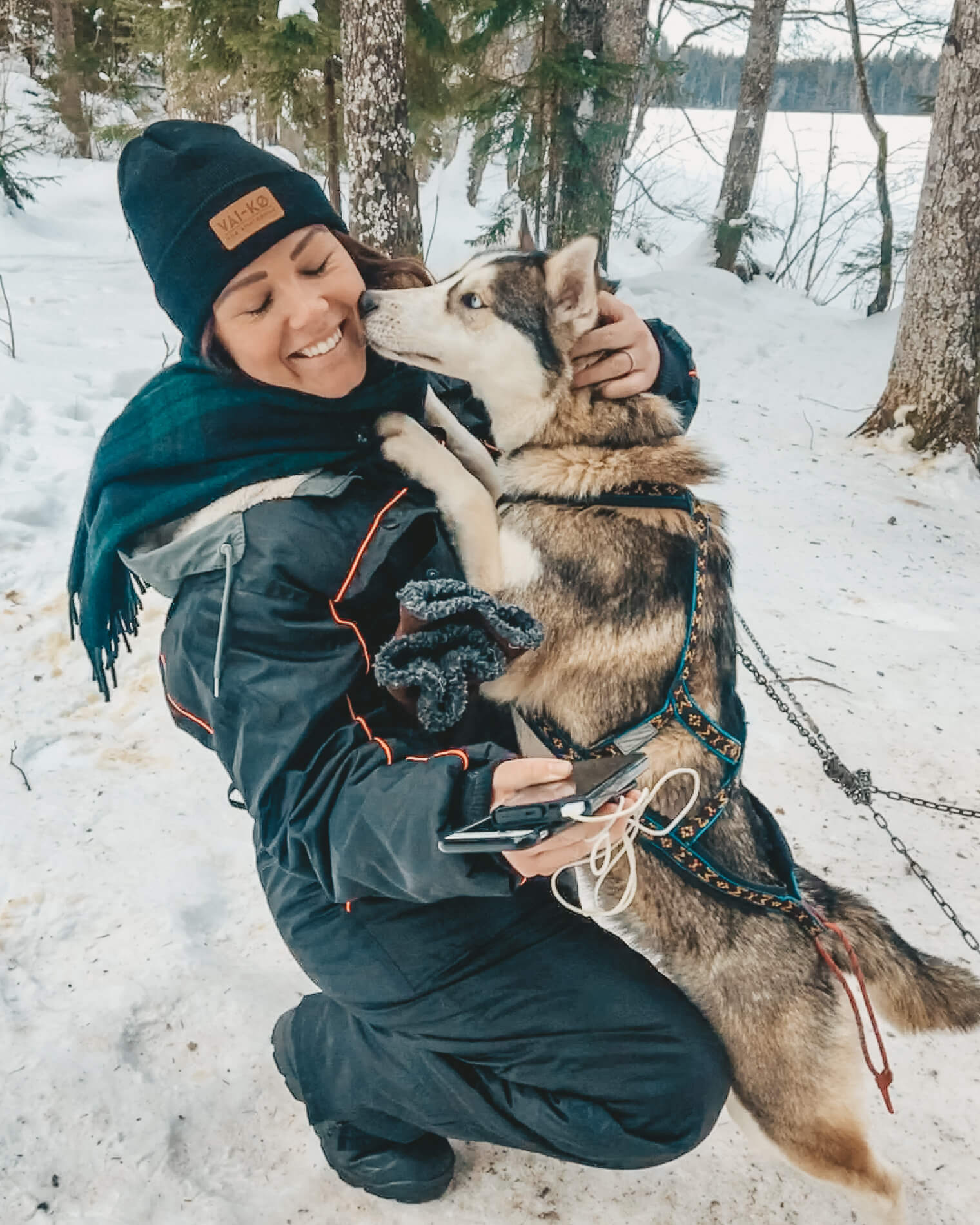 The first thing I notice when I arrive on site is that the dogs aren’t making much noise. He’s got a trailer at the back of his car and when he opens the doors, I see the interior construction. Each dog has its own little wooden box and it’s stacked 5×5. I ask him why they aren’t making any noise and he explains that when they’re in those boxes, they feel comfortable and ‘at home’ and it’s their little safe space.

However, all that talk of ‘peace’ is well and truly over once they realise they’re about to get some sweet exercise.

The noise is ear-piercing. This is a husky tour, after all, and these are pure Siberian Huskies with a penchant for showing off their vocal prowess. 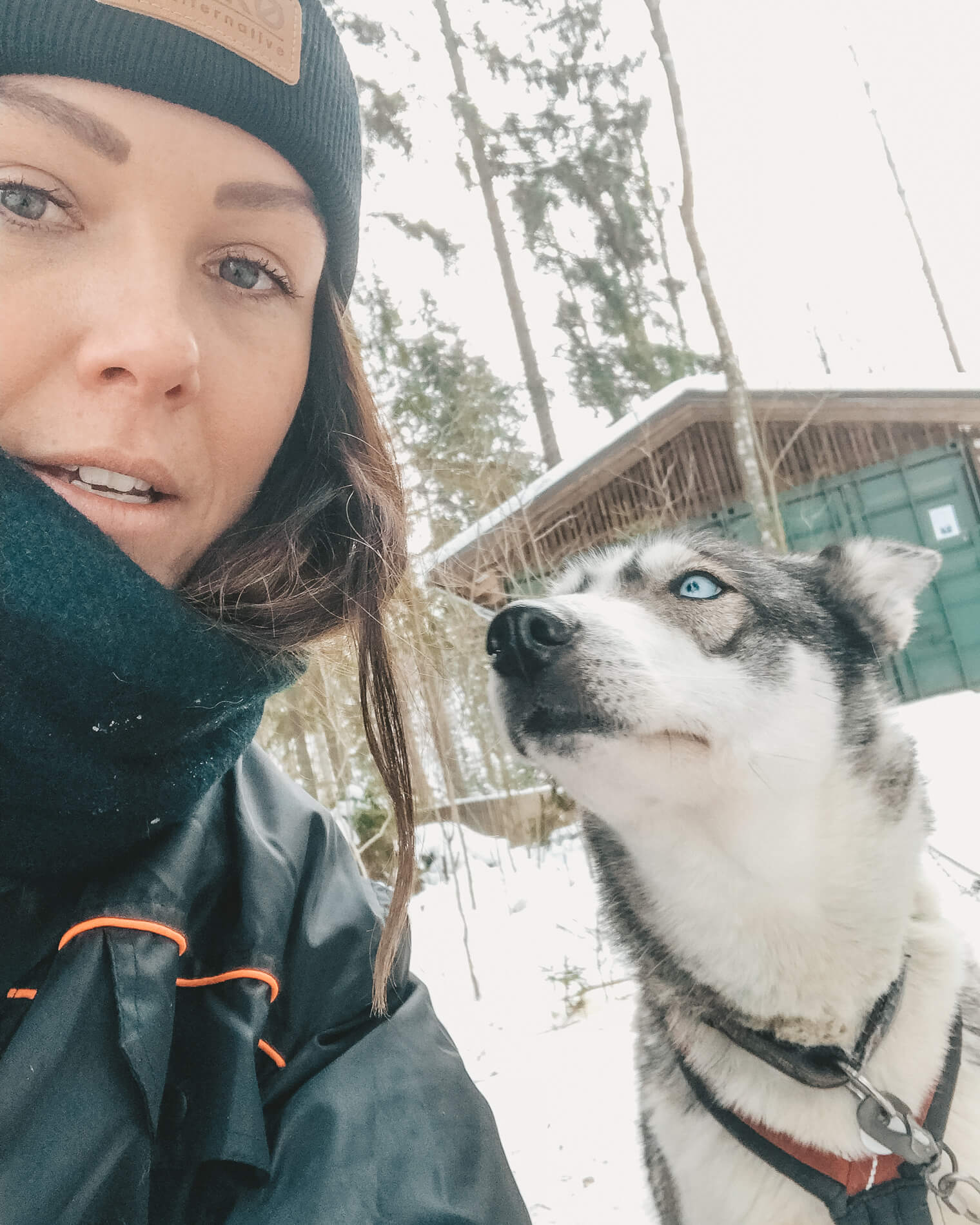 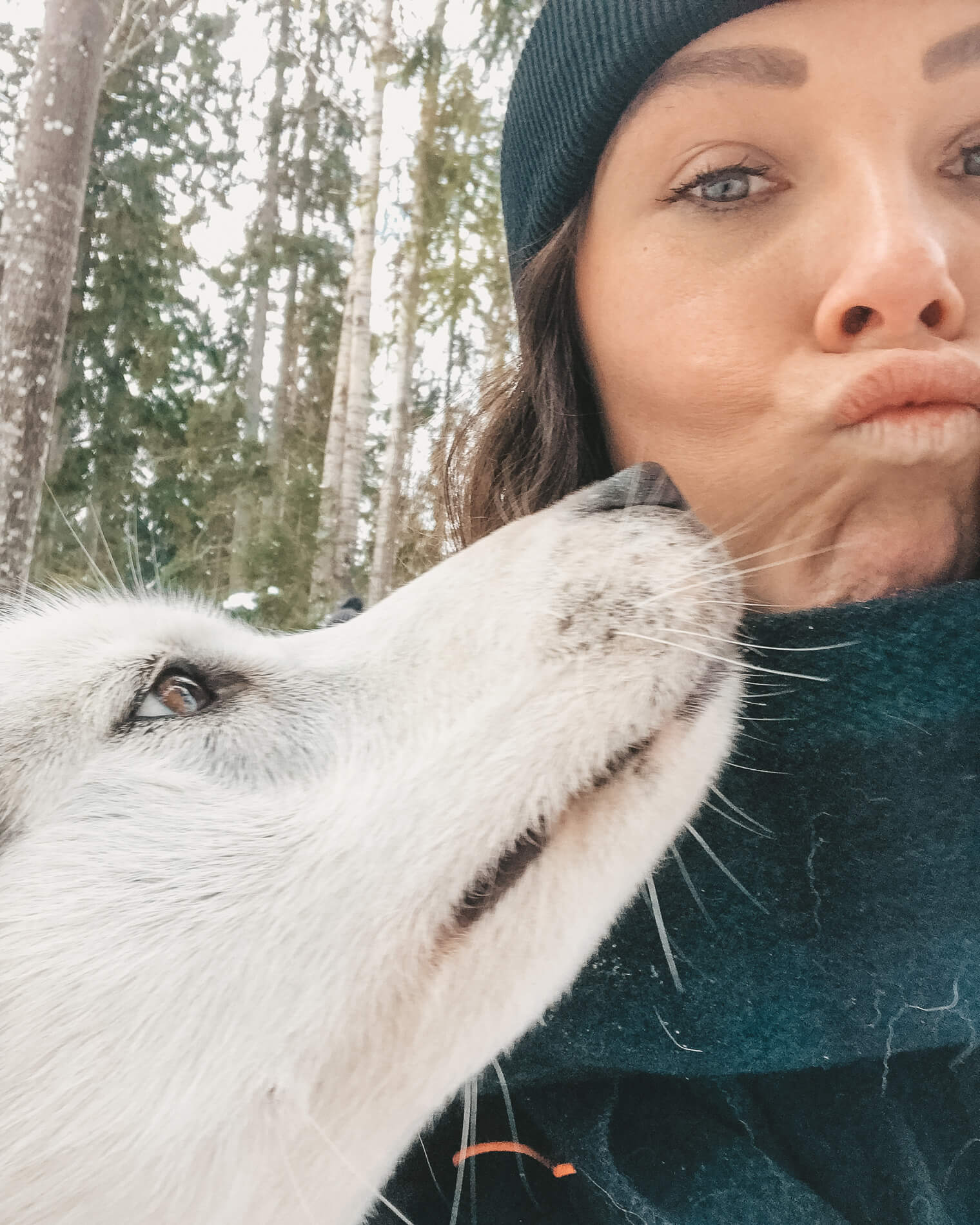 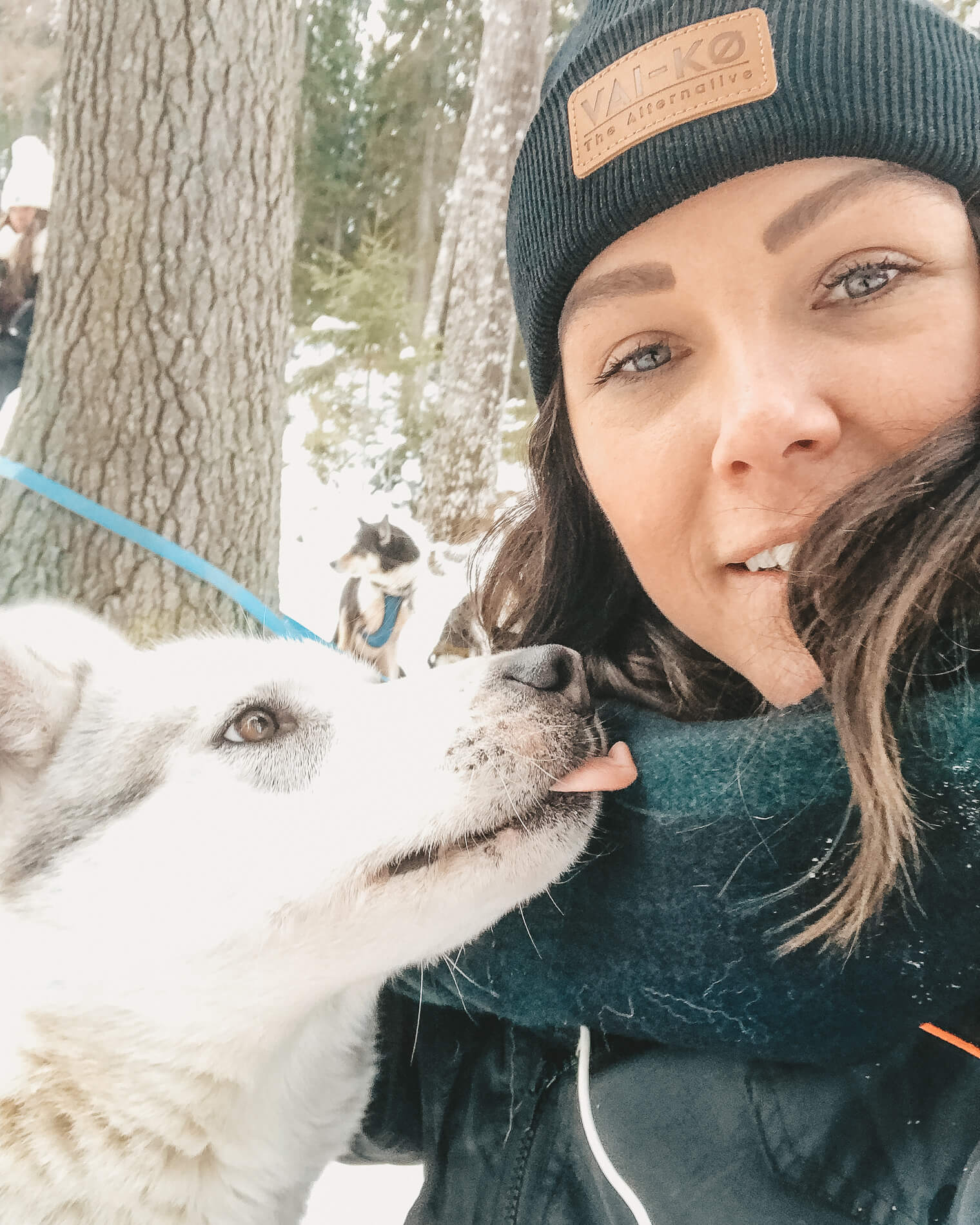 Poor Taipo is trying to get them all organised. He thrusts us five gals into some small tasks to give him a hand. He’s trying to put the dogs in lines on different sleds. For some unknown and odd reason, (perhaps it’s the Finnish way) he decides to put me by myself, although I tell him I am rubbish at skiing. He jests that he always puts Australians by themselves because it’s funny to see them fall. I start to think about my travel insurance and I wonder if I’m covered for such activities. 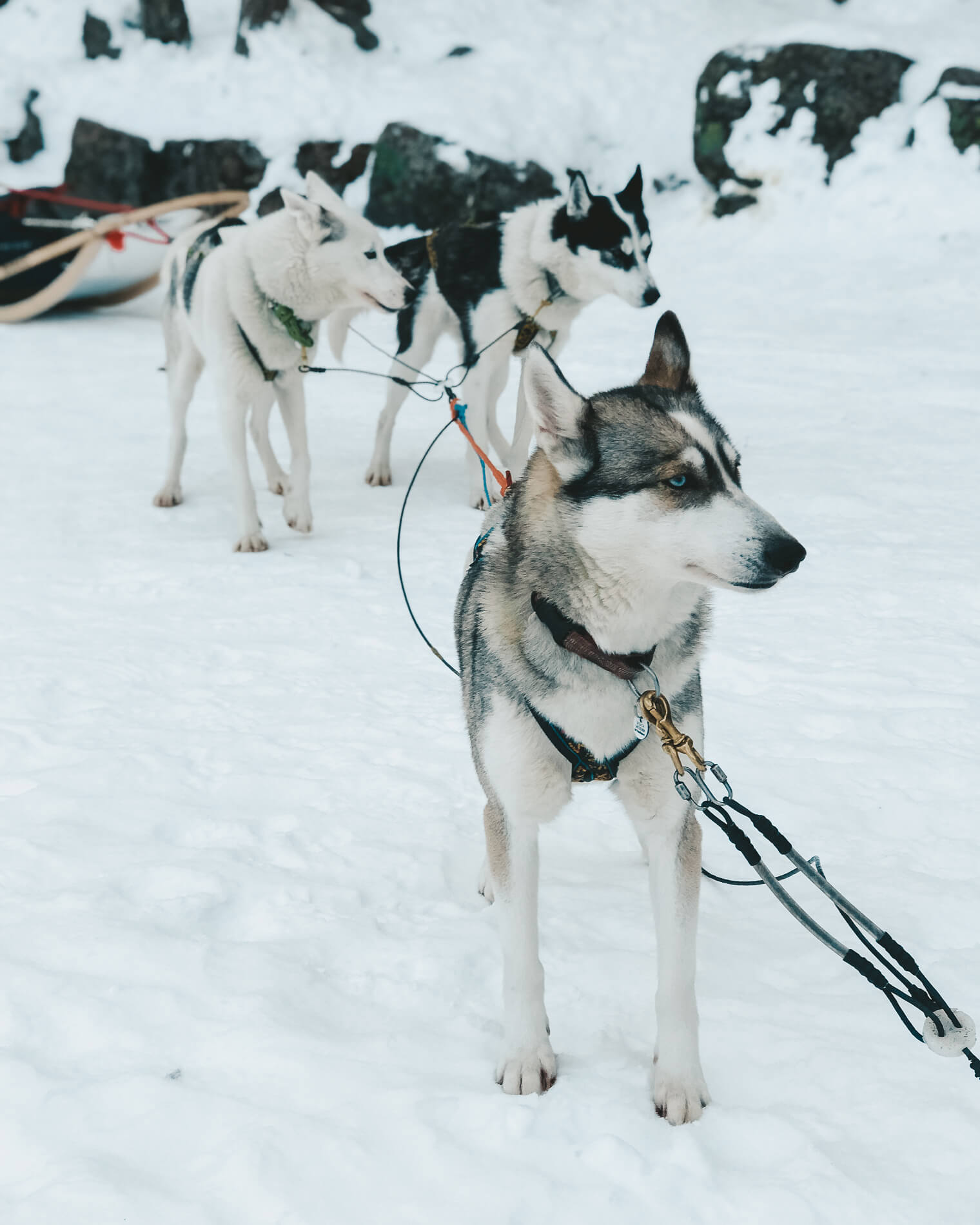 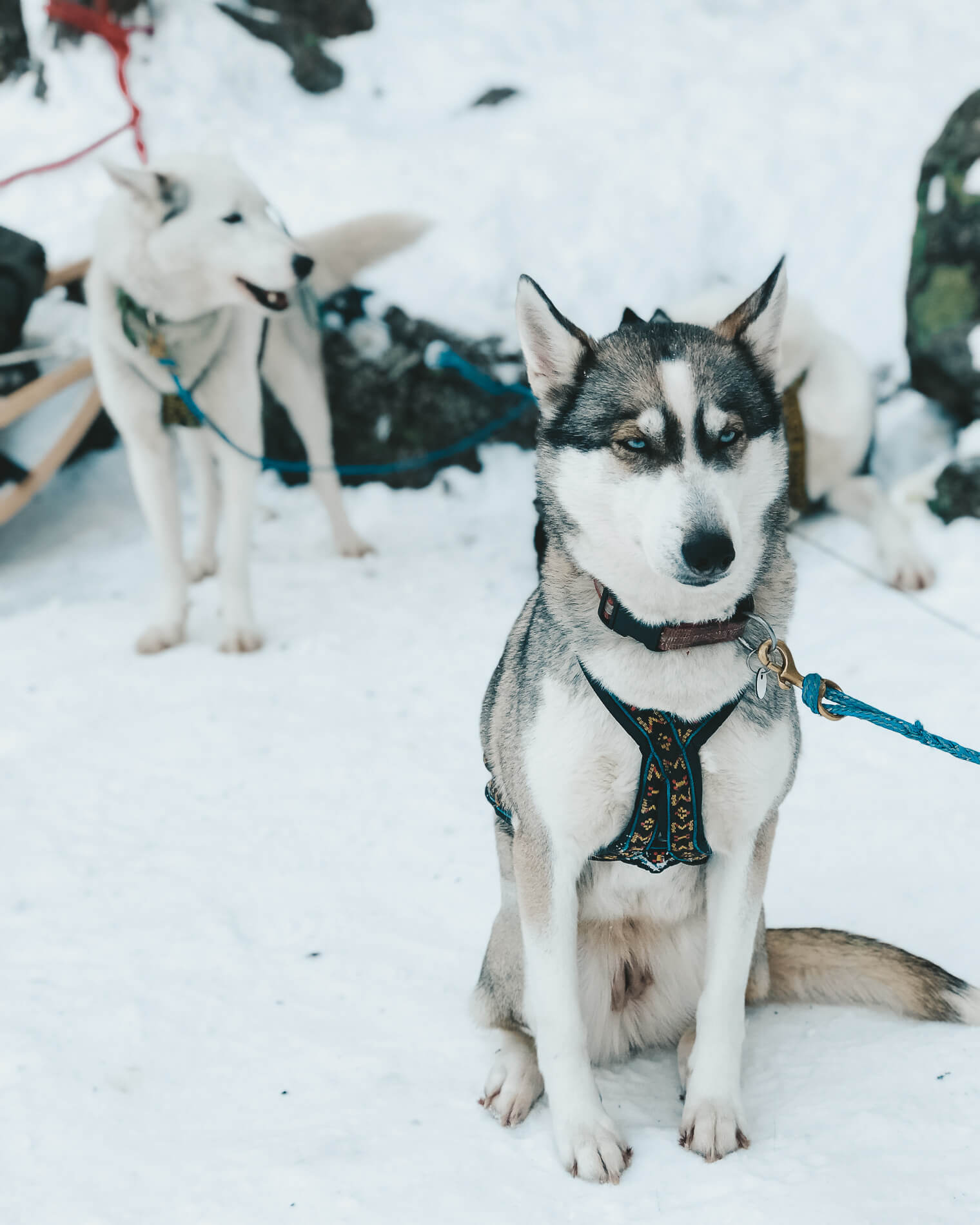 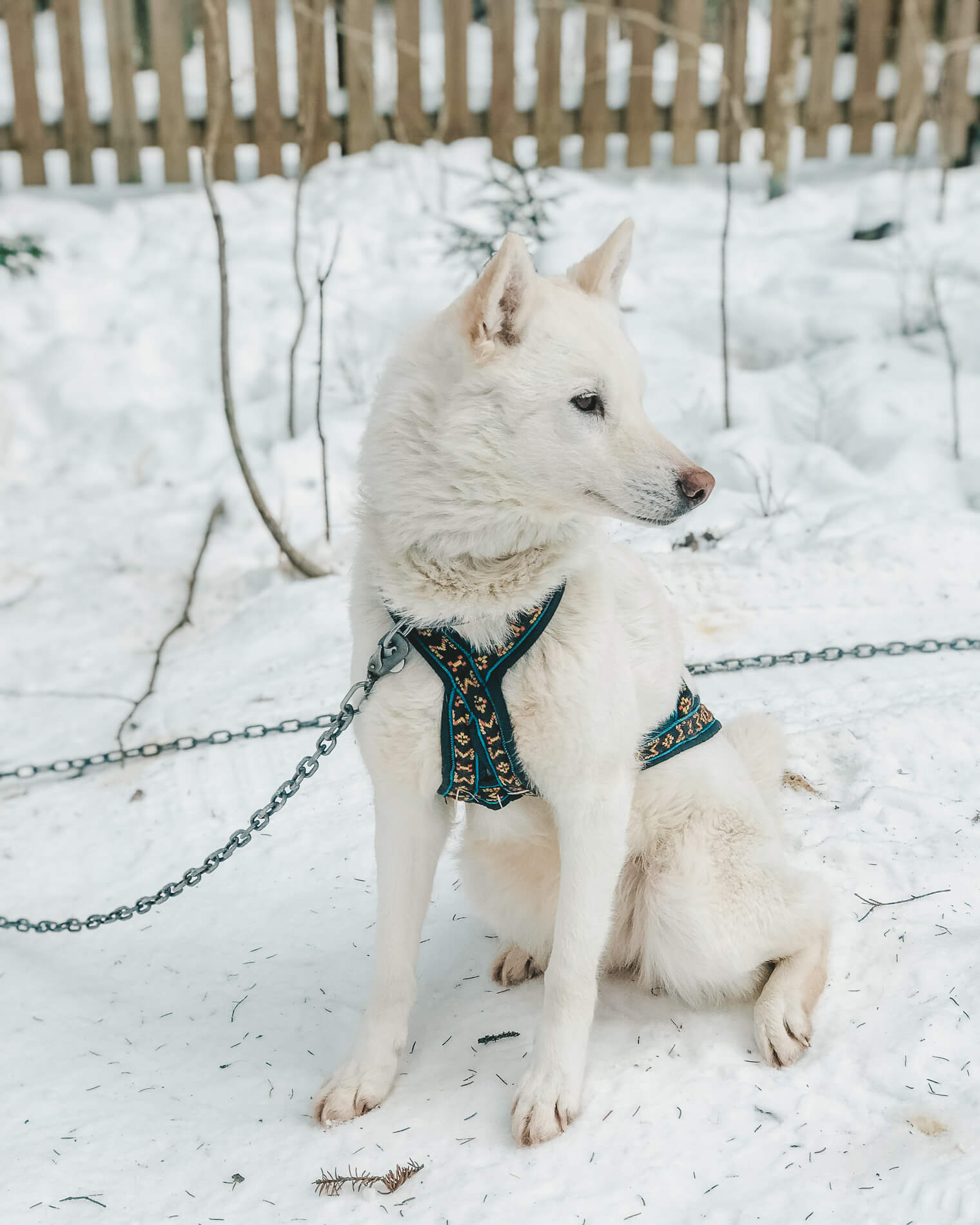 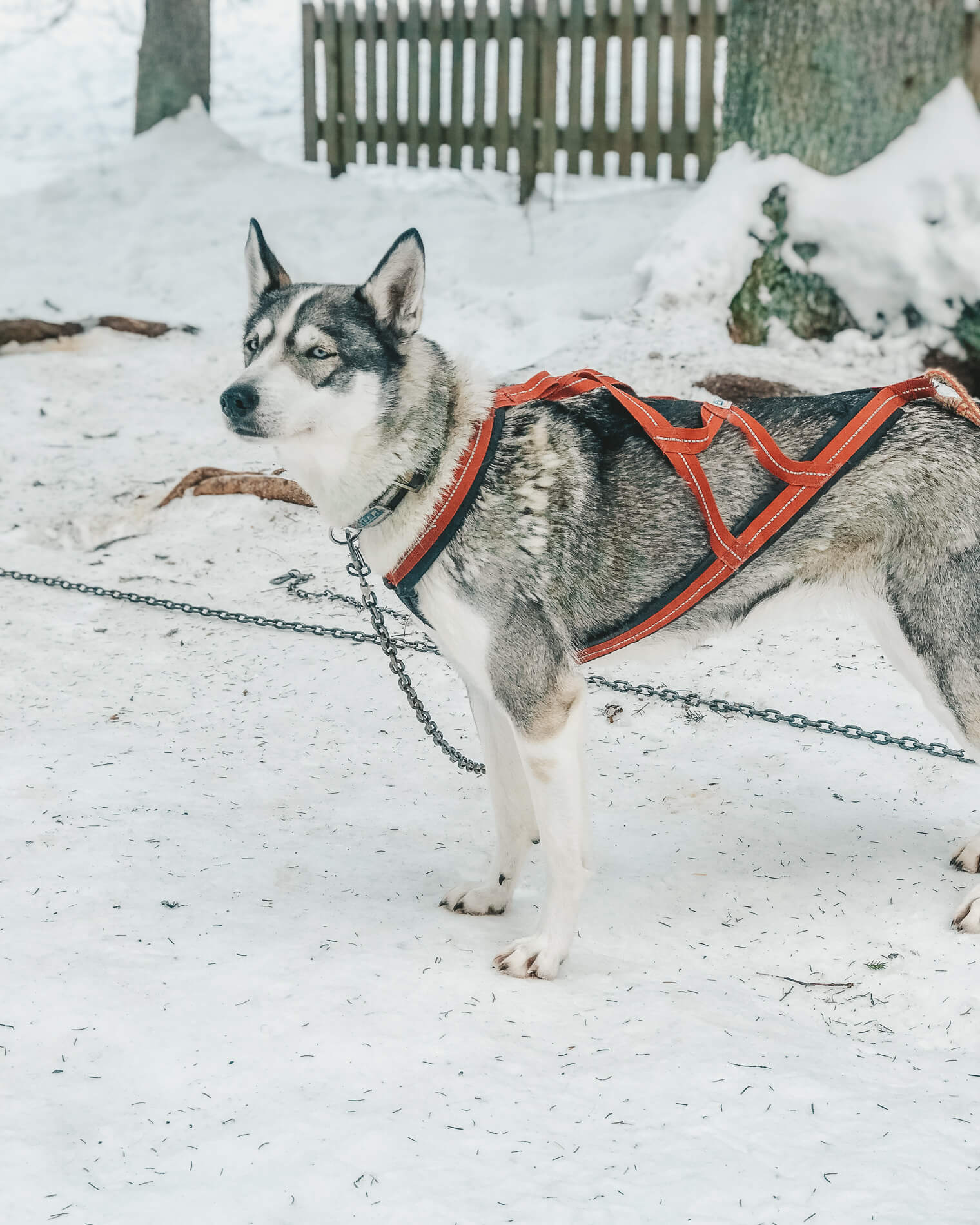 His affinity for watching Australians fall is beyond me. I also didn’t think Schadenfreude existed beyond the realms of Germany. Evidently, this ‘Australian’ joke has cast a spell on my ability to ride a sled like a normal human being. We’ve been riding only a mere 100 metres and I fall immediately.

It’s less a graceful fall to the ground and more like my dogs’ power has catapulted me into some hard Finnish ice with a sharp ‘THUD‘. Taipo must have heard my blood-curdling scream. He halts all the teams and comes rushing to my aid, like a real Finnish gentleman. I decide we can press on and that I’m not going to fall again. But I don’t hesitate in telling him ‘I told you so.’ 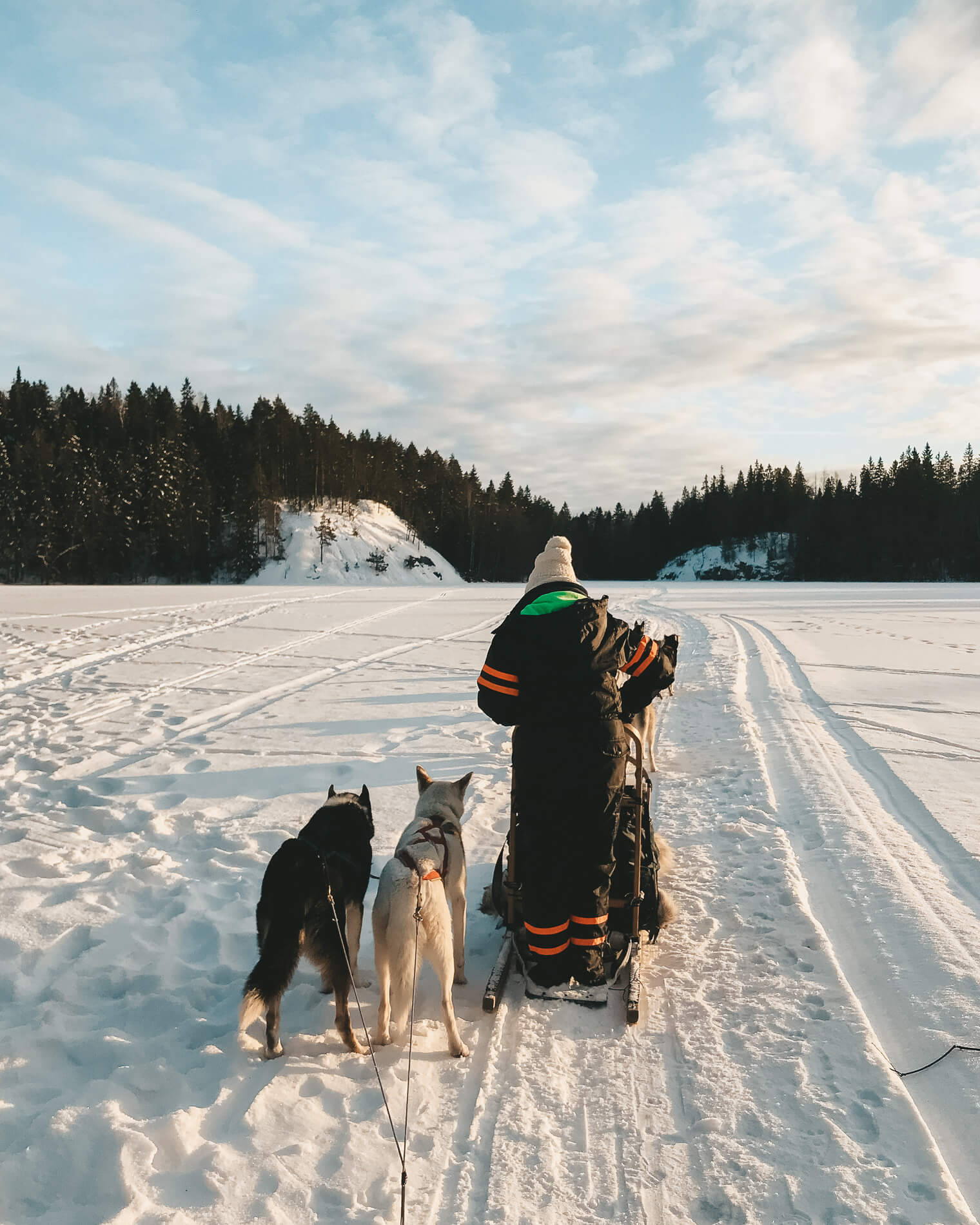 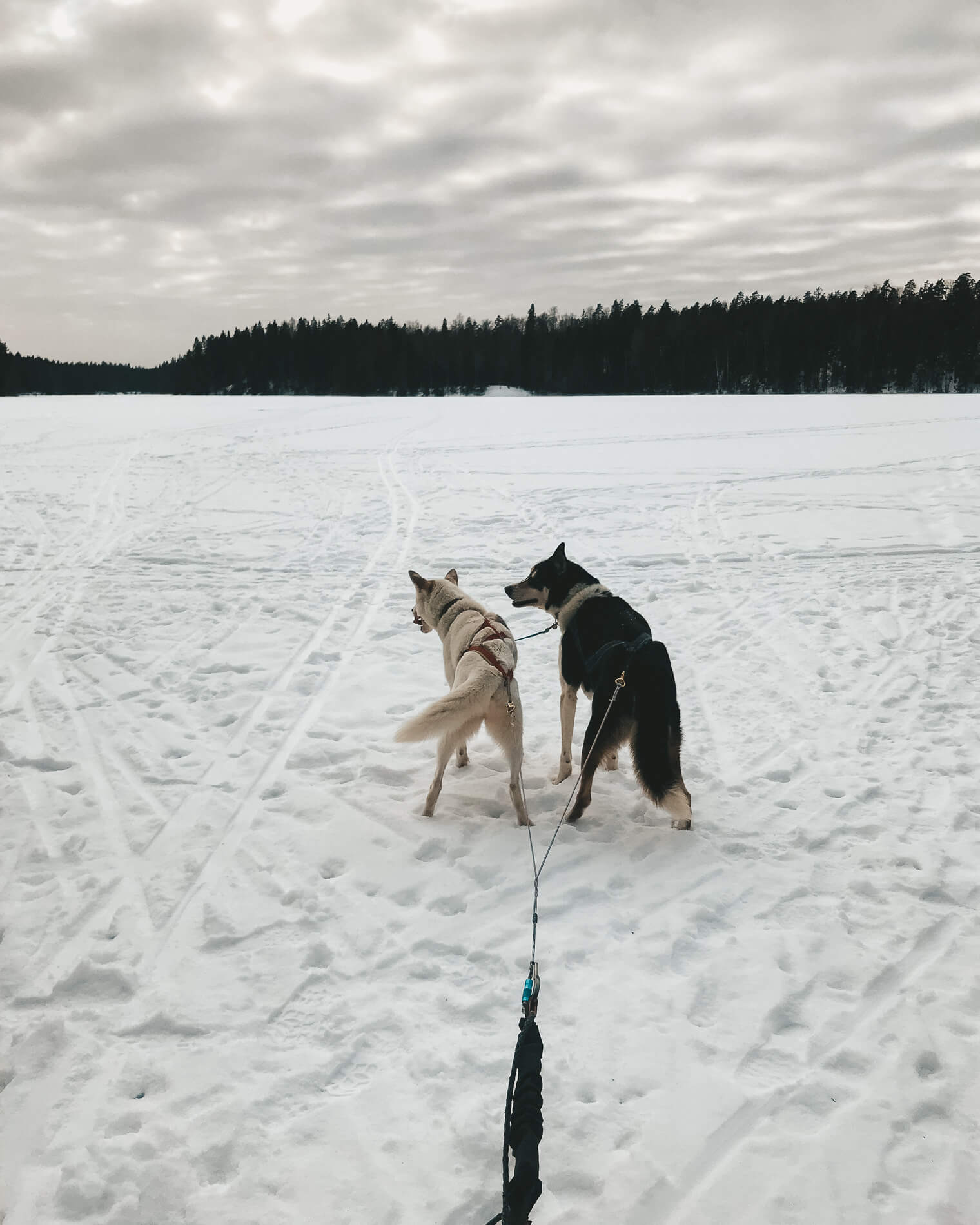 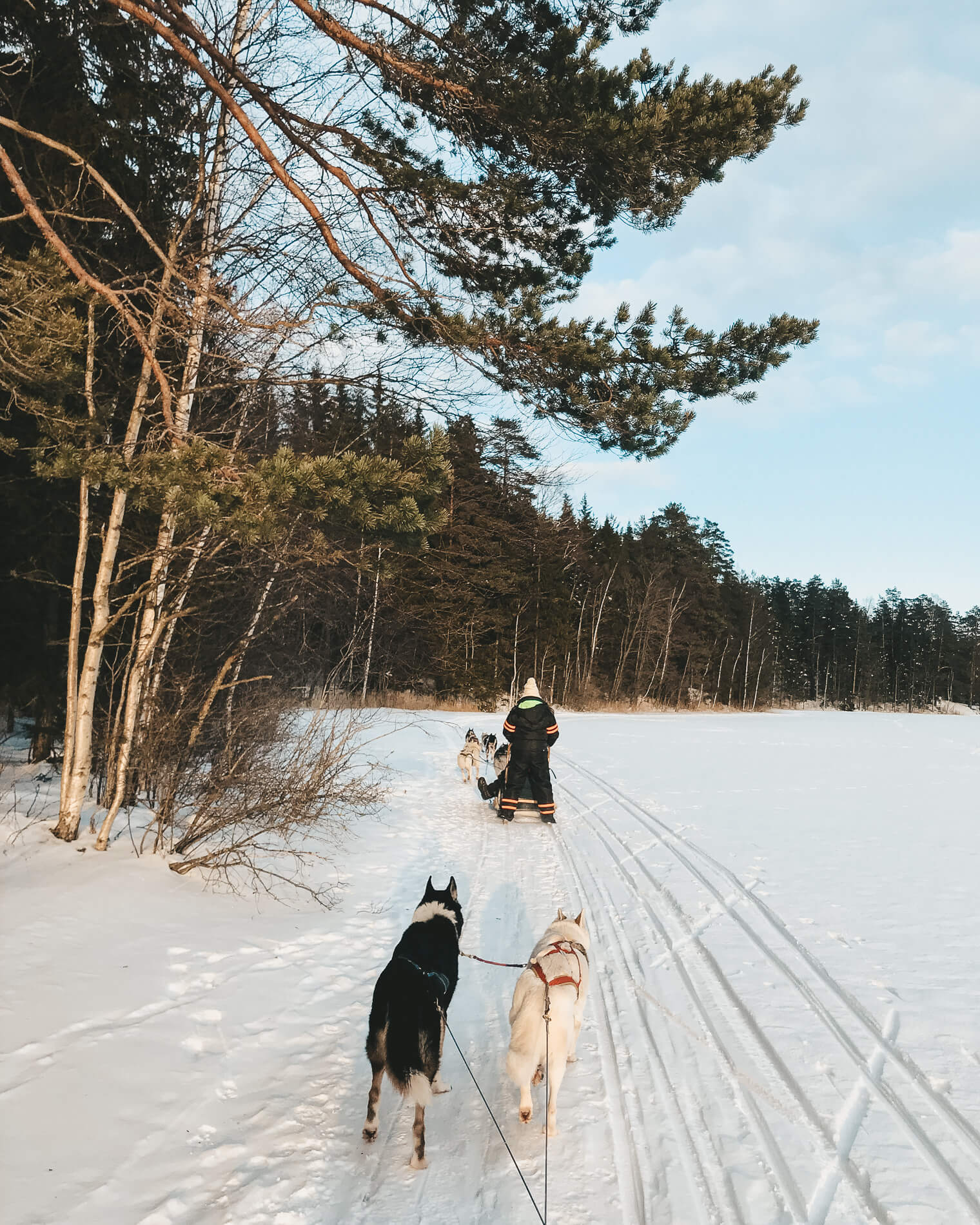 When dog sledding near Helsinki, out in the open, wintry Finnish air, you really have the sense that the dogs love it. They run with exuberance, gusto and force. You often need to put the brakes on and slow them down. Without monitoring the team in front of you, they would continue running endlessly. It’s rather akin to driving a car.

We stop for a break in the Finnish forest. Taipo lights us a fire and brings out his wife’s homemade snacks. We eat sausages and surprisingly, he’s also brought vegetarian options, too.

The dogs know it’s break time. Most of them are happy to have a little snooze. I observe that after a quick rest, a couple of them begin barking again. I ask Taipo why that is and he explains that the dogs know there’s more exercise to come and they’re excited. 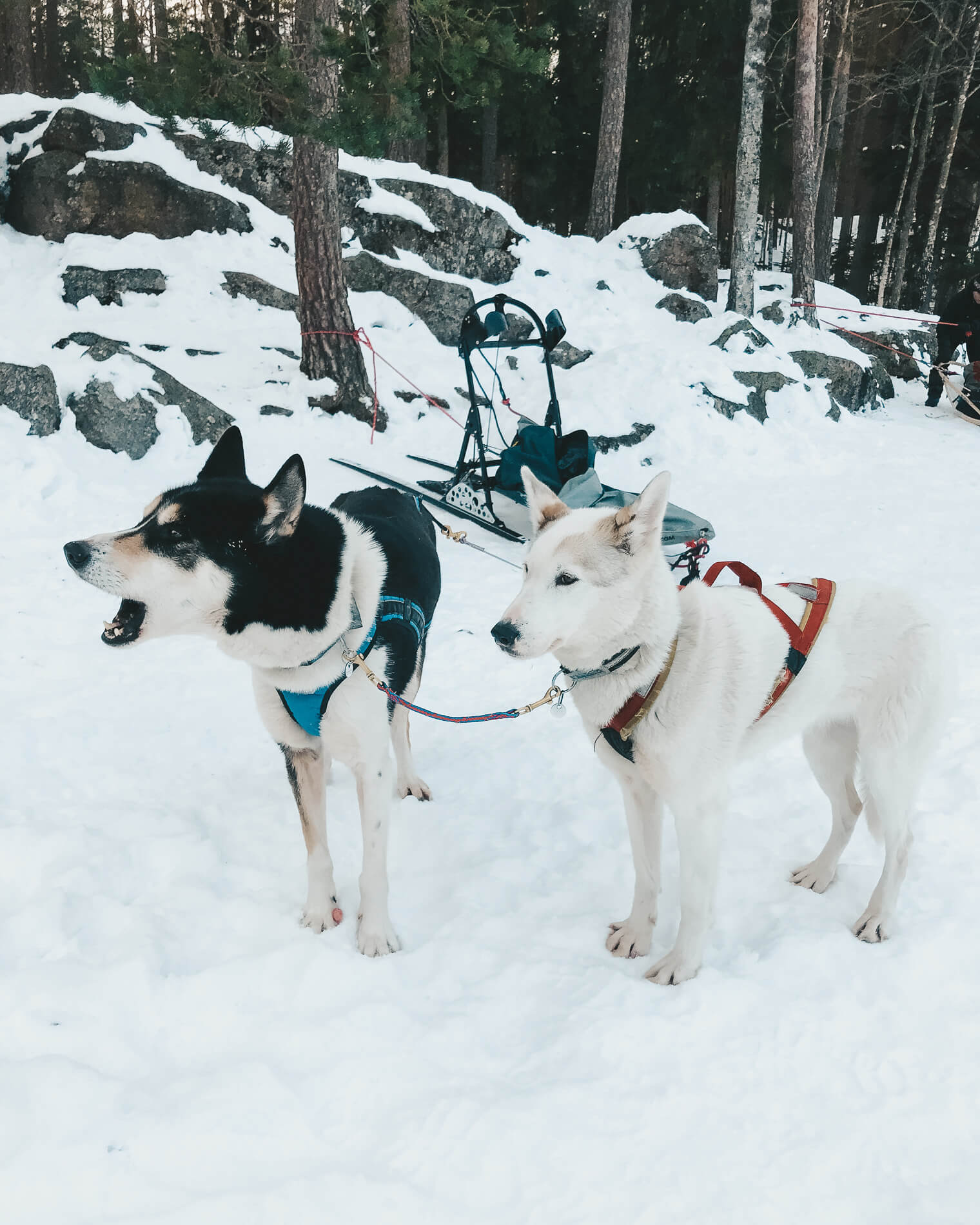 On the ride back, the beautiful January sun comes out to play and makes all the tracks absolutely glisten. At this moment, I think ‘Wow, I sure am lucky to be having this experience right now.’ It seems impossible that in one day I’ve been able to meet some white, Finnish reindeer AND go on a husky tour. 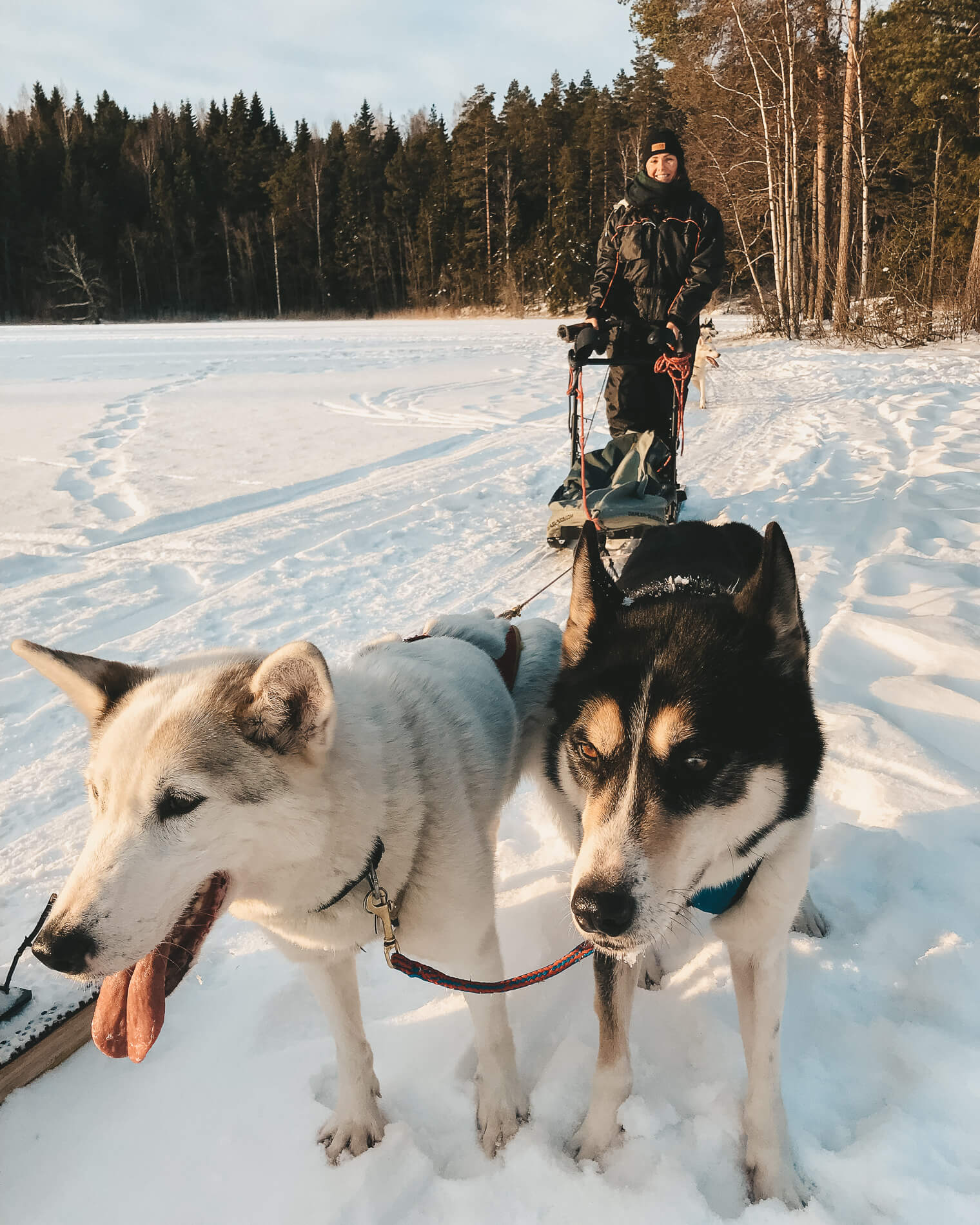 When we return back to civilisation, I get phone signal again. I realise I’ve left my poor Finnish friend Wilma wondering if I had been murdered. The last message she got from me was: ‘Hey, will be late coming back to Helsinki. Just met a man in the forest who says he has 24 huskies and I’m going riding with him. I’ll keep you posted!’

Many hours have passed and Wilma has been left wondering if I’ve fallen victim to a criminal of the woods. I’ve just been dog sledding near Helsinki. 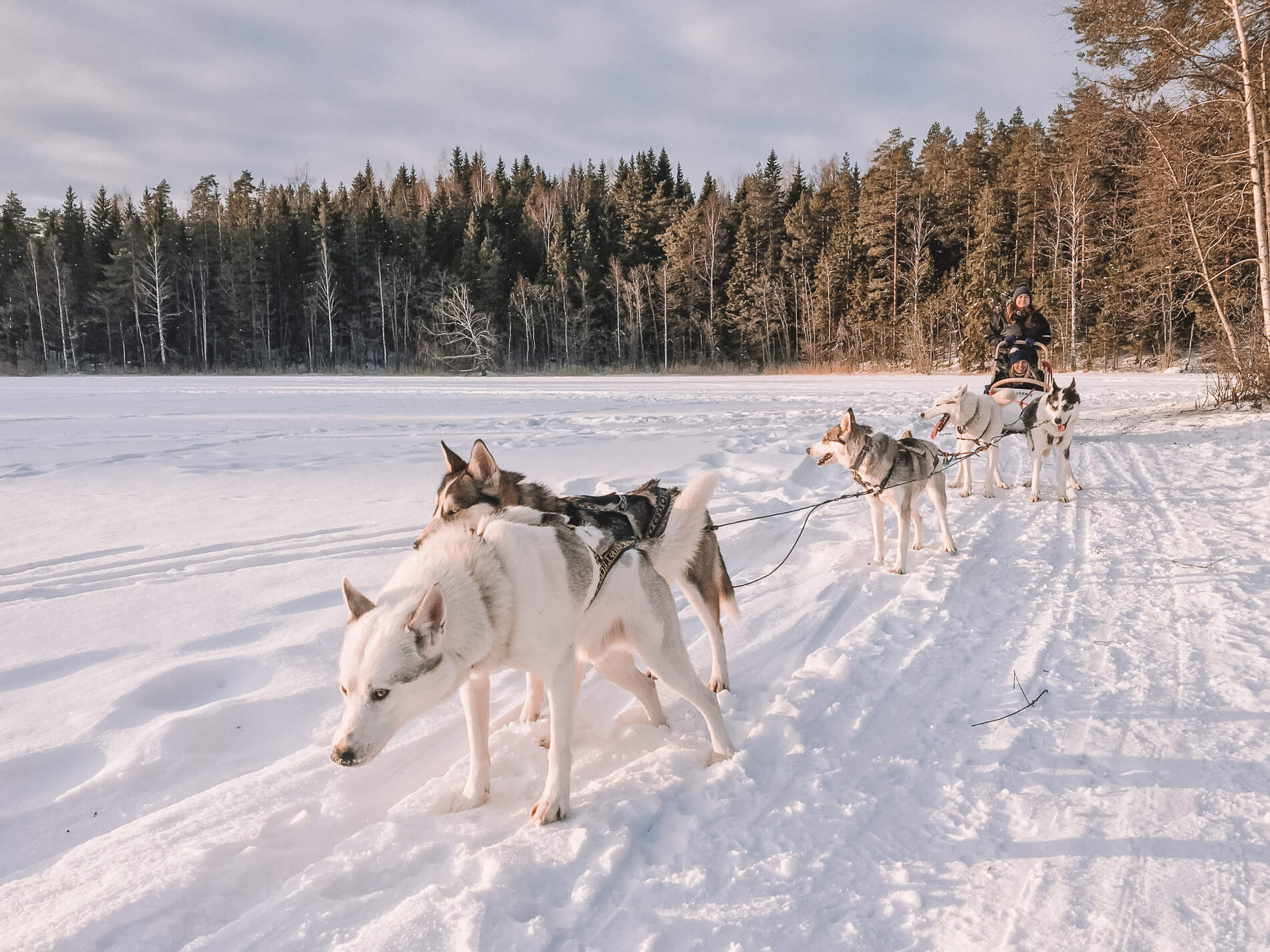 Is a Husky Tour Ethical?

It’s definitely worth mentioning that this needs to be taken into account when booking any activity involving animals, including dog sledding near Helsinki. As I believed this was an activity which these dogs are bred for, and it’s more or less within their nature, I decided to give it a try. I’ve since read online that you can look for signs of abuse like skinny dogs, cut and blistered feet and exhausted dogs. I did ask Taipo many questions about his four-legged friends – such as how often they get rest and what their living conditions are like. He told me the following:

I normally wouldn’t book an activity which involves an animal but in this case, I really had the impression that Taipo’s dogs love to be outdoors, they were wagging their tails and barking with excitement – and I saw many of them jump onto him for attention and cuddles. This showed me he has a good relationship with his dogs and that they all love each other. If you want to go dog sledding near Helsinki, I recommend Taipo’s husky tour.

For further reading on the topic of dog sledding you can look here: Morality of Dog Sledding / Husky Safari in Finland / Finland Responsible Tourism 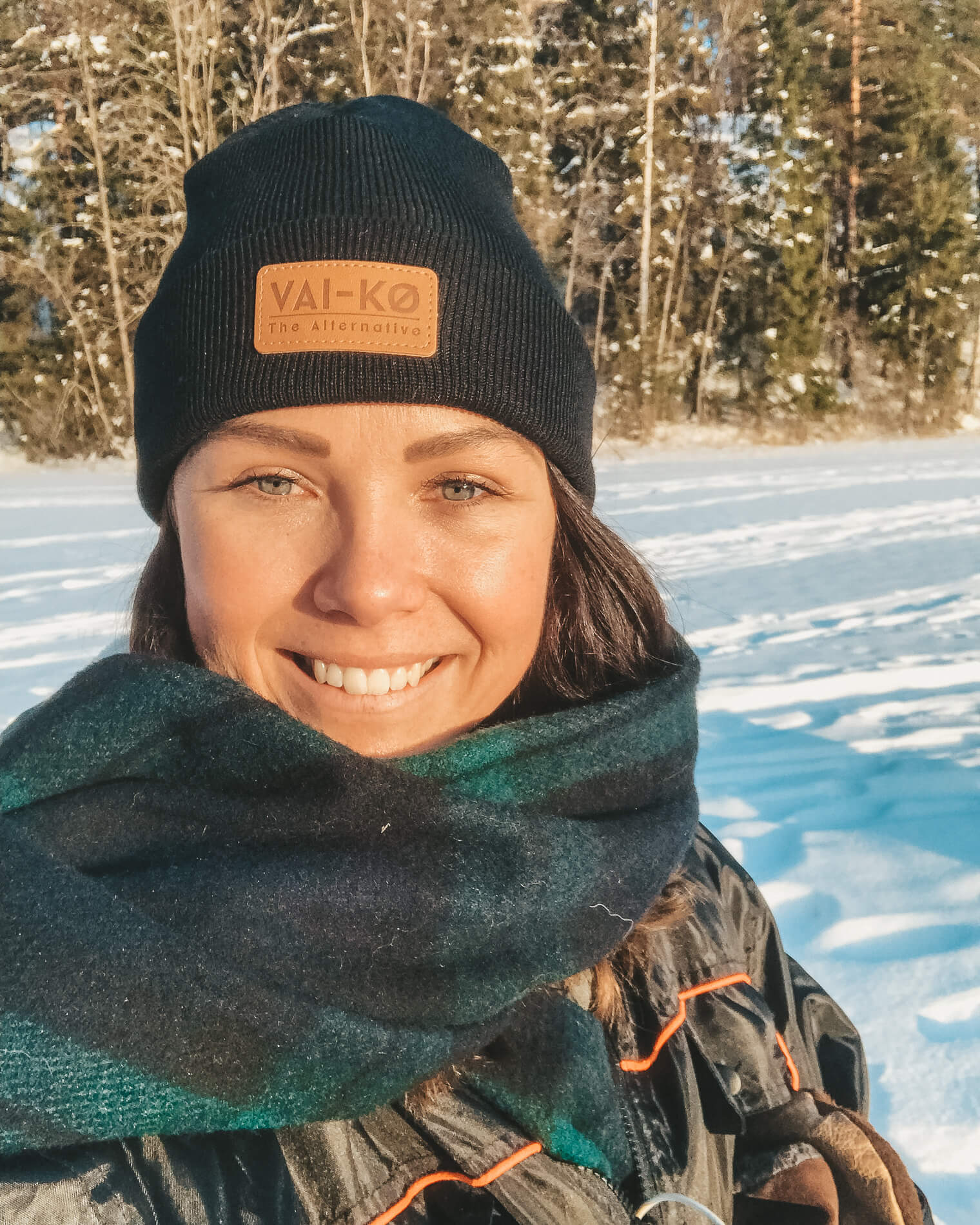 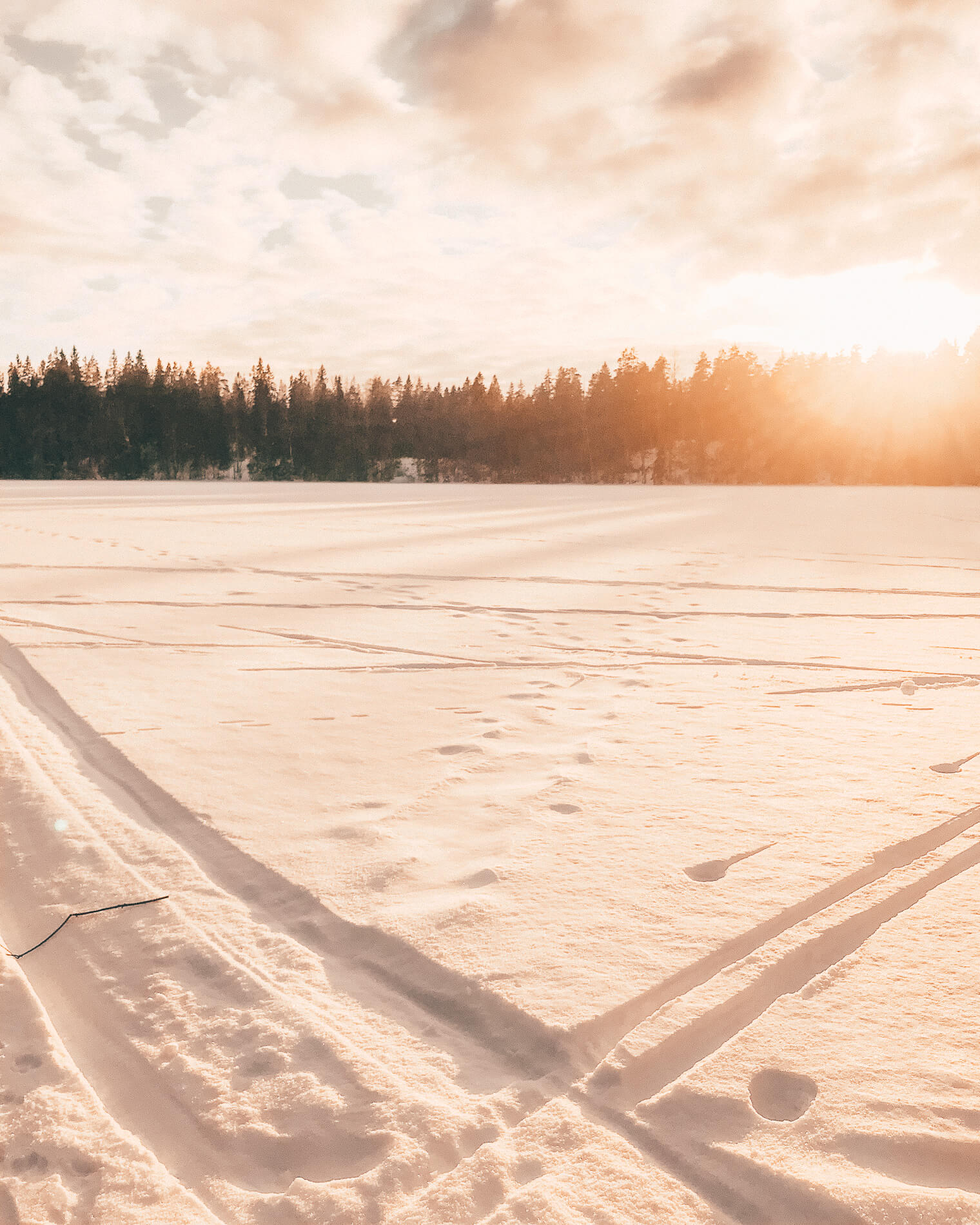 If YOU want to book this experience, the company is called Arctic Expeditions. I paid for it myself and as I said, it was about 200 euros in total. In my opinion, it was money well spent – I really enjoyed it! 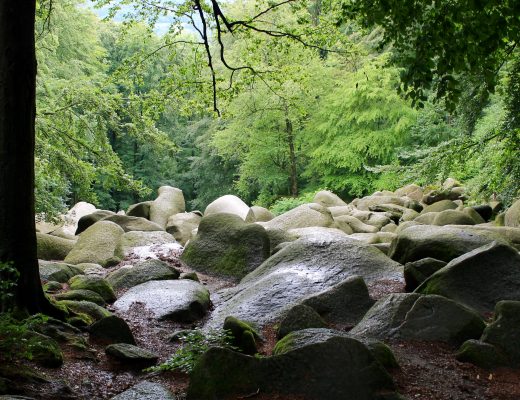 Spectacular Places To Go Hiking In Germany: Sea of Rocks 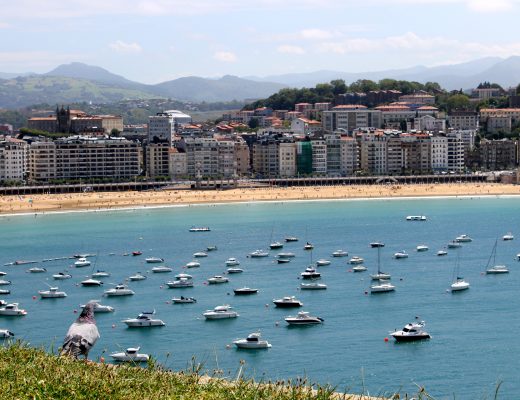 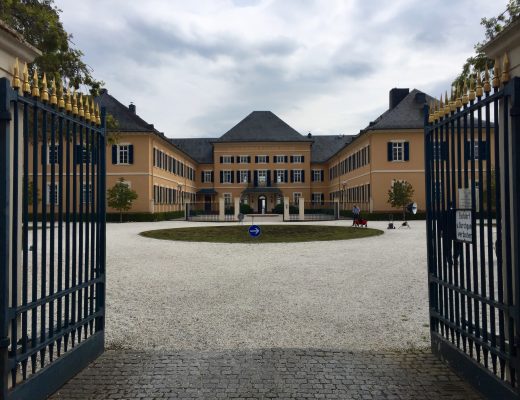 A Day Trip to Johannisberg Castle in Geisenheim