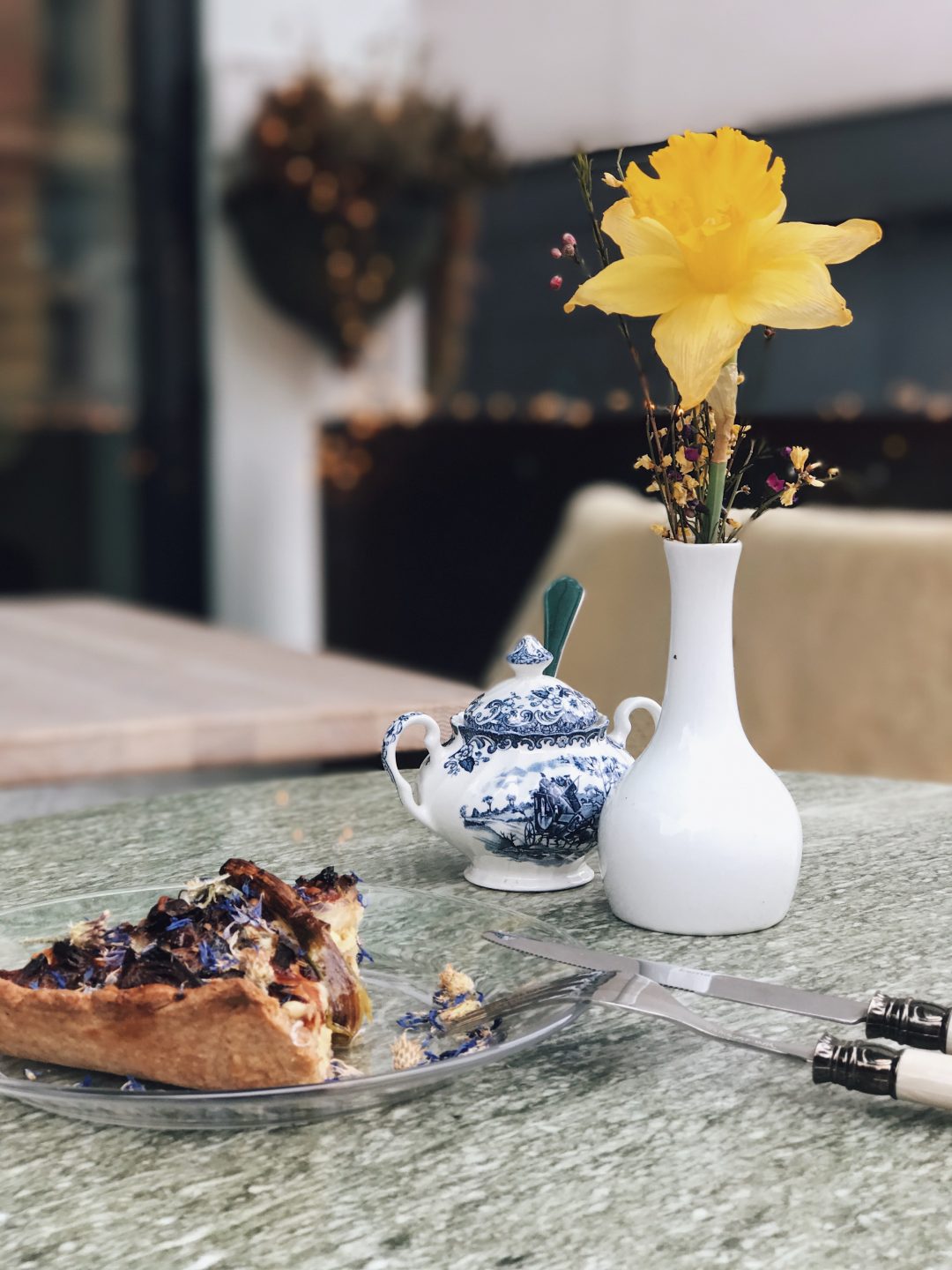 Welcome to the world of Frankfurt am Main. Notoriously known by ‘other’ Germans as a city full of crime and debauchery. Sadly known by tourists as ‘a boring banking city’ and ‘nothing you need to see’ but today, I will be standing up proudly for Frankfurt and all the lovely things to eat in Frankfurt. 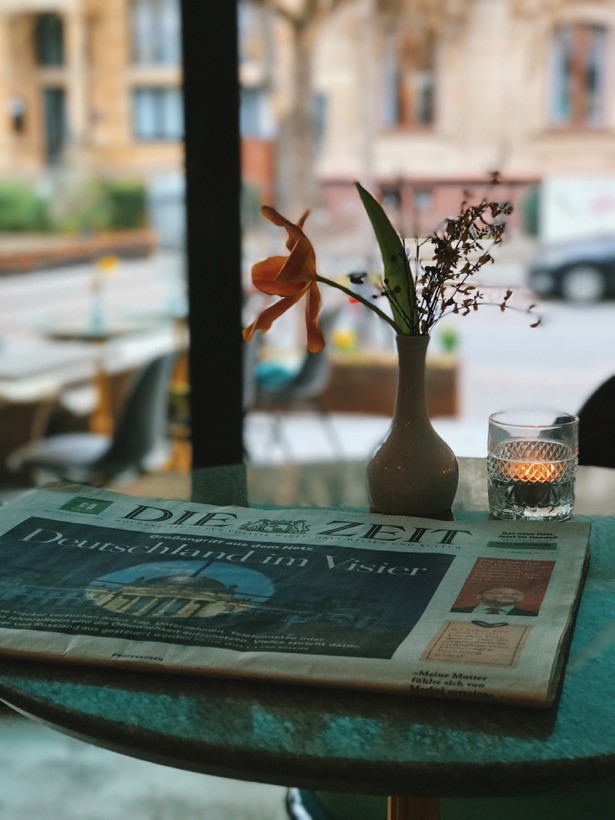 The thing is, I moved here from Australia nearly 6 years ago. Ironically, I left behind a world of sparkling, clear blue water and fine, bleached white sand (sorry to make you roll your eyes but it’s so true…. just click here to see where I’m from: Everything you need to know About Noosa and its Fairy Pools) and I’ve swapped that for a beautiful, old apartment from the 1900’s smack-bang in the middle of Frankfurt’s Red Light District.

Frankfurt’s Red Light District is indeed worlds apart from the tourist trap of Amsterdam’s R.L district. It’s not an area I would recommend staying in per se but there are countless new speakeasy bars, cafes and restaurants in the area. For proof of this and more things to eat in Frankfurt, just click on my most popular post ever: Where to eat and drink – Bahnhofsviertel; Frankfurt: Germany. 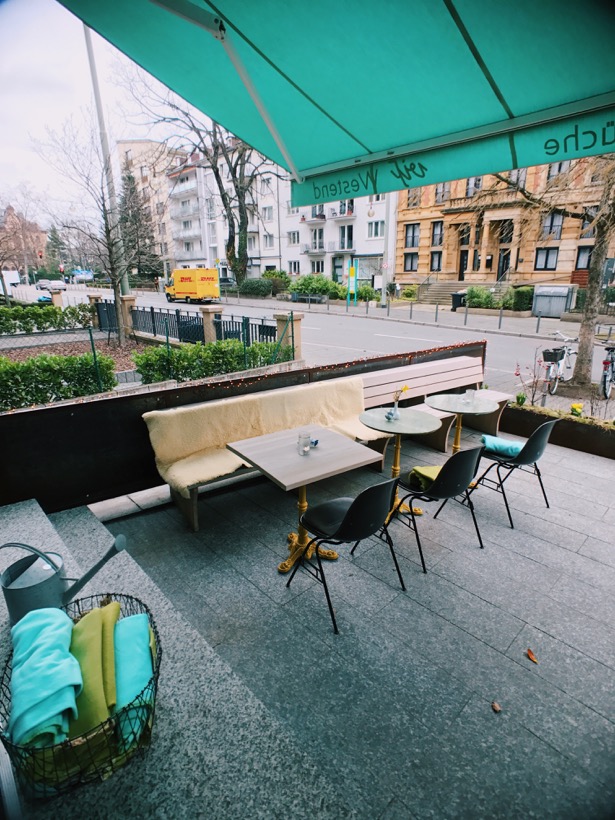 A little glimpse of some of the Westend vibes.

Interestingly however, just around the corner from Frankfurt’s little inner-city pocket of naughtiness, there’s an area called Westend which is absolutely packed with beautiful ‘Altbauten’, which is a German word for an old building, something with really tall ceilings and beautiful big windows – basically it was a gorgeous architectural period which is unbeatable. Westend is mainly a residential area with some scattered food and drink options but today I’d like to show you a new cafe which has recently opened for business. It is definitely worth the visit if you’re looking for new and exciting things to eat in Frankfurt. 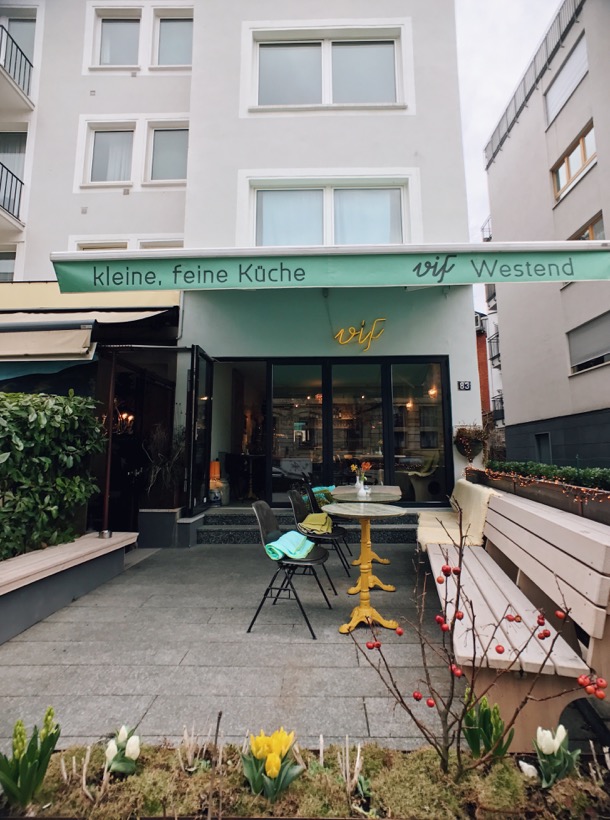 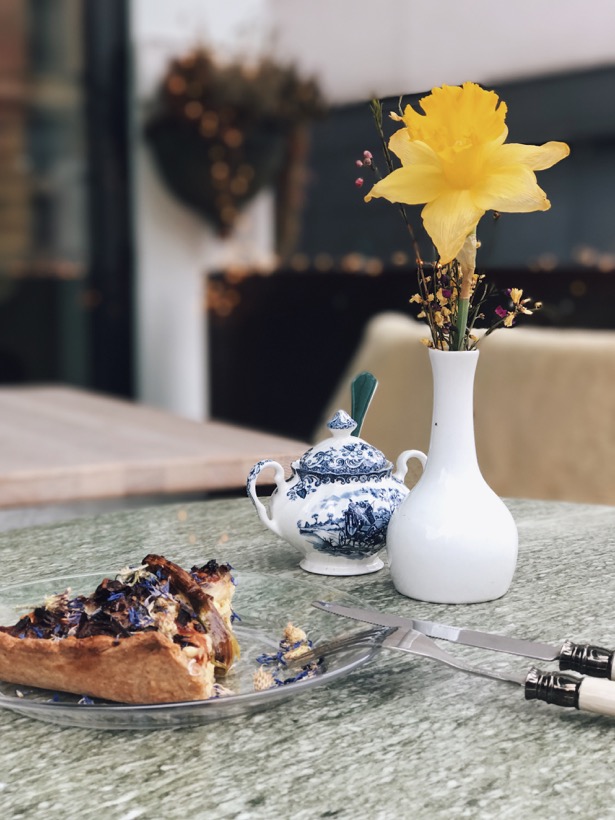 Seriously when I go back next time, I hope they’ve made this tart again.

I first met Louise Hoepfner, the owner of Vif, when I was desperately looking for a place to get incredible things to eat in Frankfurt. (Something I refer to as ‘foodie’ food. Many hate that term but I find it helps when you’re looking for options.) 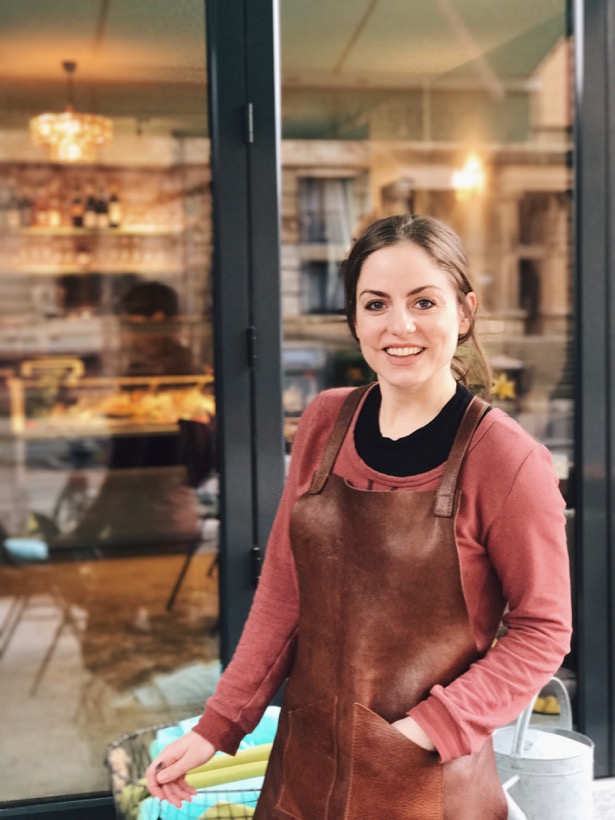 The owner of Vif: Louise

I also recognised that Vif was mentioned in the same Guardian article that also mentioned Kaptain Kenny recently: https://www.theguardian.com/frankfurt-brexit-bankers 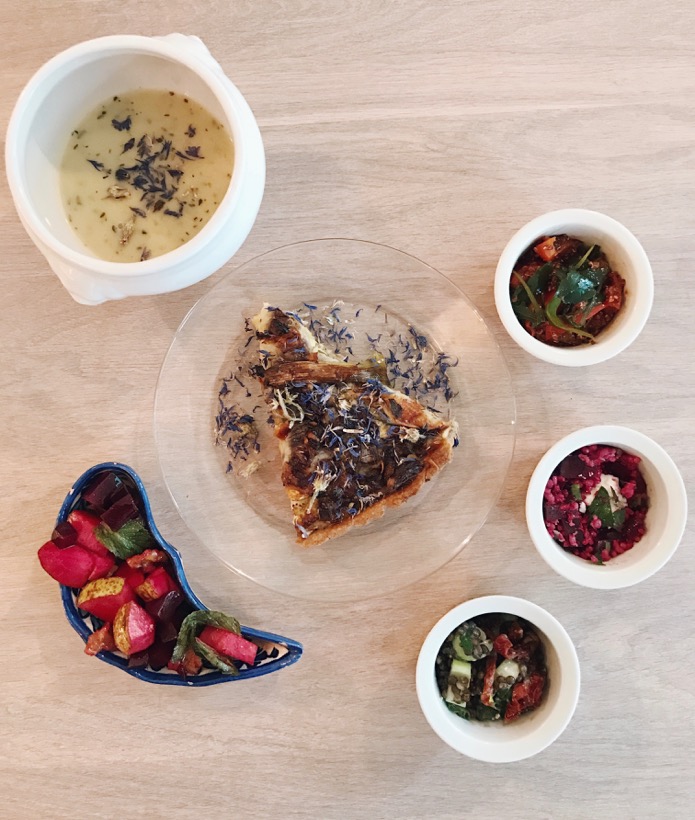 I cannot tell you how sick I am of seeing menus offering ‘Schnitzel und Pommes’ for 8 euros. Sure, I love a good old Schnitzel like anyone else but not every day! I’m happy to pay more money to make sure I eat food which is tasty, nutritious and doesn’t put me into an oily, carby food-coma directly after its consumption.

I blame Schnitzel und Brot for making me gain nearly 8 kilos in the last 6 years and I will give credit to myself for giving up Schnitzel and Brot – I’ve now lost the 8 kilos again. Phew*** 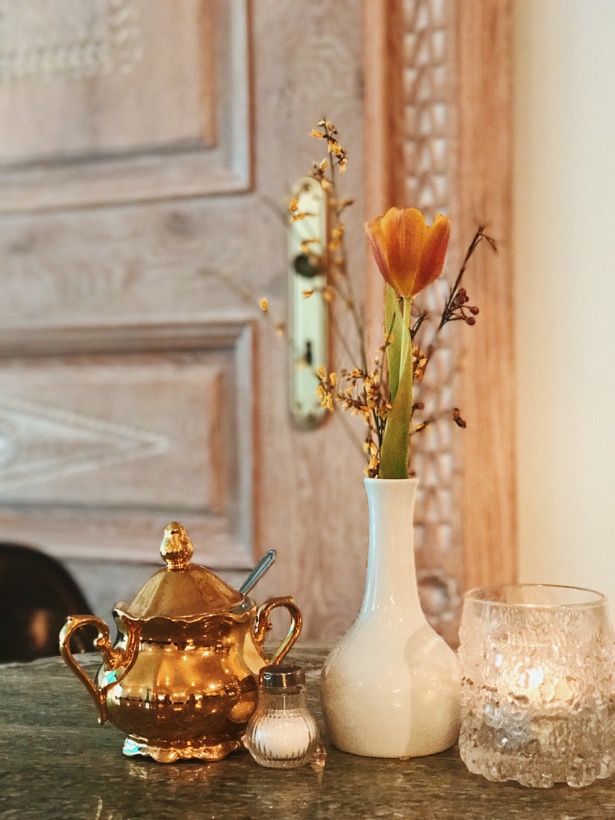 I love this space – VIF.

My American friend Megan from the travel blog http://www.meganstarr.com/ first told me about Vif. She said: “It’s the perfect place to take your laptop and do some work while eating really good quality food. Plus, they are dog friendly!”

A great atmosphere to chill out – promise. 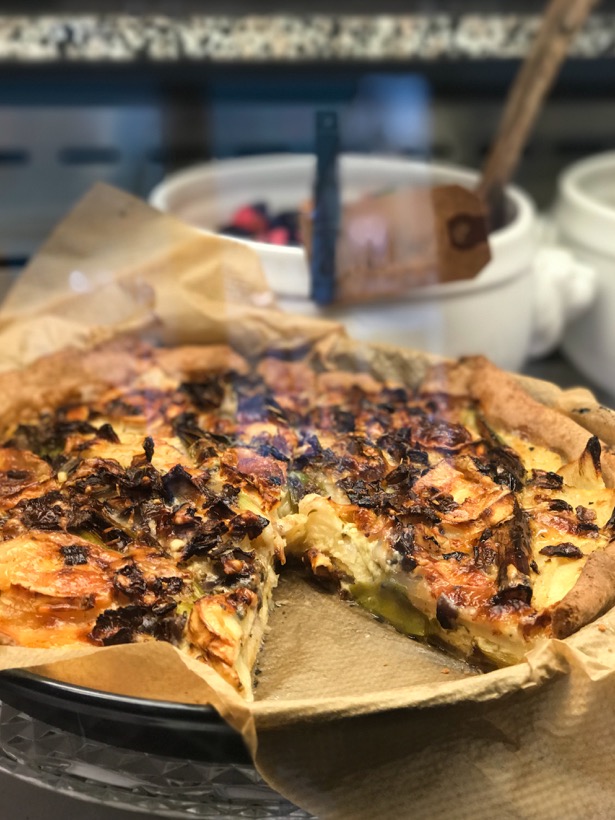 So I went along the first day I could, laptop in tow. Louise was lovely from the first day I met her – she was happy to explain the concept to me and passionate about her food and ingredients. She was also thrilled that I knew what the ingredients were. (For example: quinoa, pearl barley, lentils, spelt flour used in her tarts and quiches…. the list goes on.) 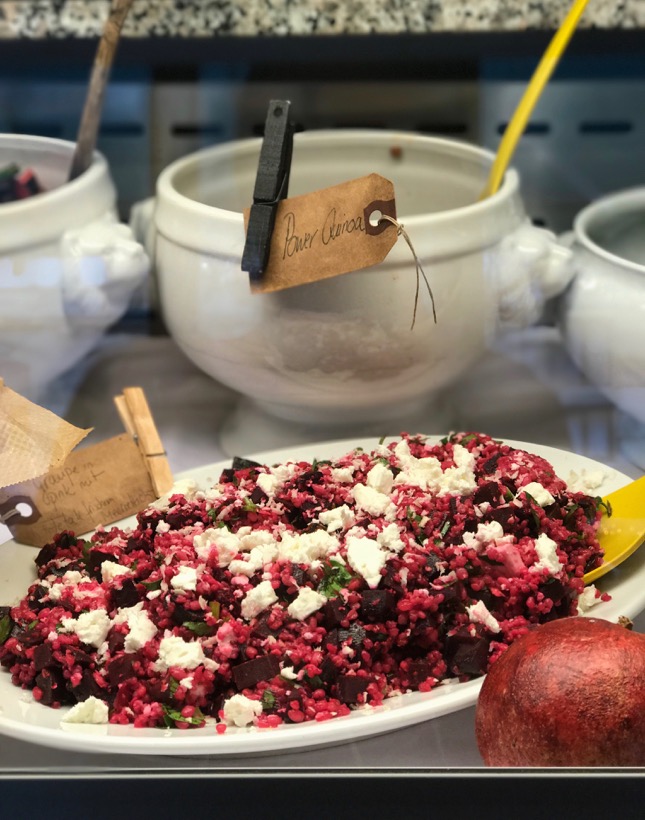 Her meals often have a sprinkle of the superfood pomegranate throughout them.

Her main offerings are: salads, tarts, sandwiches and a daily soup. For the sweet-tooth there is of course cake and coffee and for those who love a ‘real’ drink, she has craft beer, cider and wine. 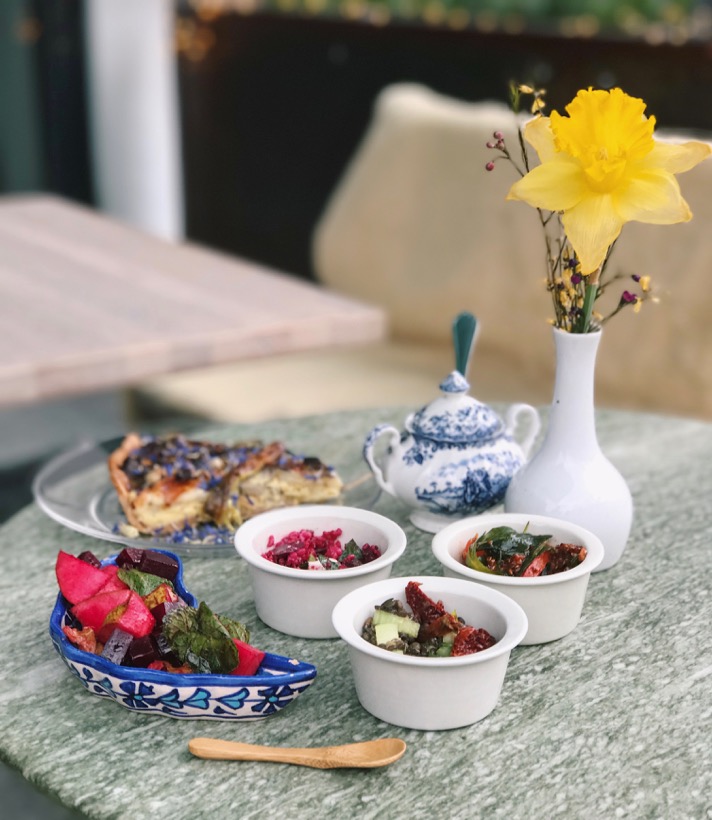 What’s on the menu today? A beetroot, sweet potato and goats cheese tart / a pear, beetroot and mint salad / a pearl barley and feta salad / a lentil, sun-dried tomato and parsley salad / a quinoa and rocket salad.

She originally comes from a town near Duesseldorf but I was quite astonished at the way she quickly switched to flawless English when she heard my English-speaker’s accent in German.

Louise says that Vif’s concept would work in any big German city where there are people who like good products and healthy, trendy food. The difference is that she doesn’t just do vegan or superfood, she also does comfort food and uses some ingredients like carbs (good carbs, I swear!) which are necessary for concentration. She normally uses a base of of either potatos, lentils, pearl barley or quinoa but makes sure her food has a modern twist and taste. 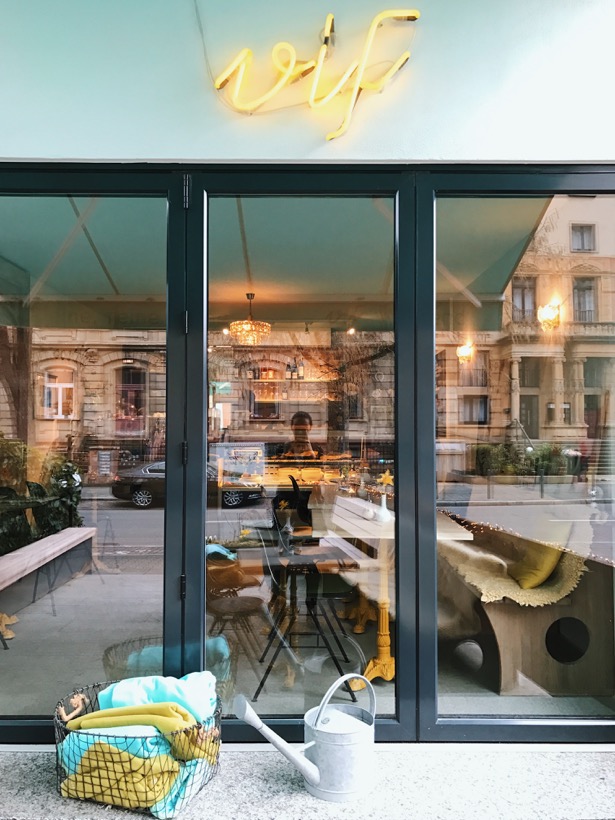 Things I love about this picture: Louise’s choice of using yellow is marvellous. It’s the first colour that the human eye recognises, did you know? Secondly, I love that with the doors shut, you can see the beautiful Westend buildings in the glass reflection. 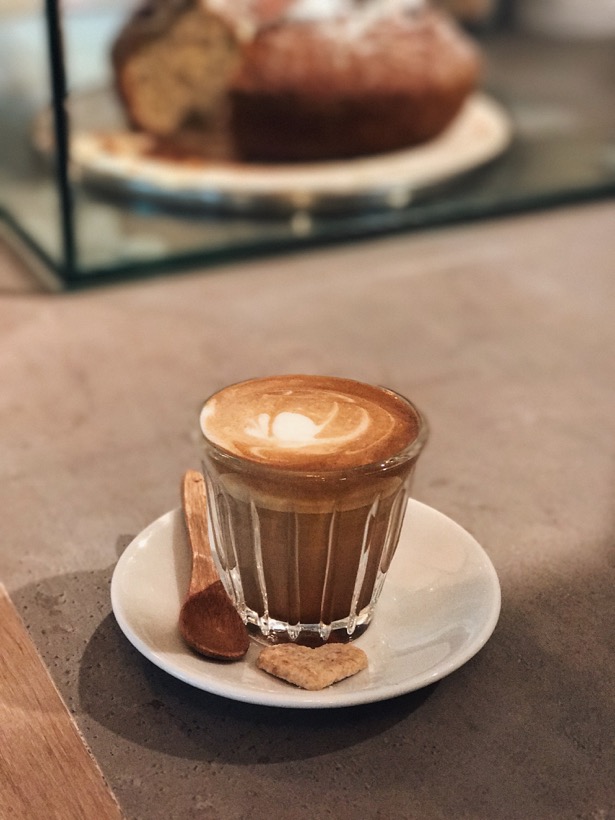 Her cortados are also lovely and strong. 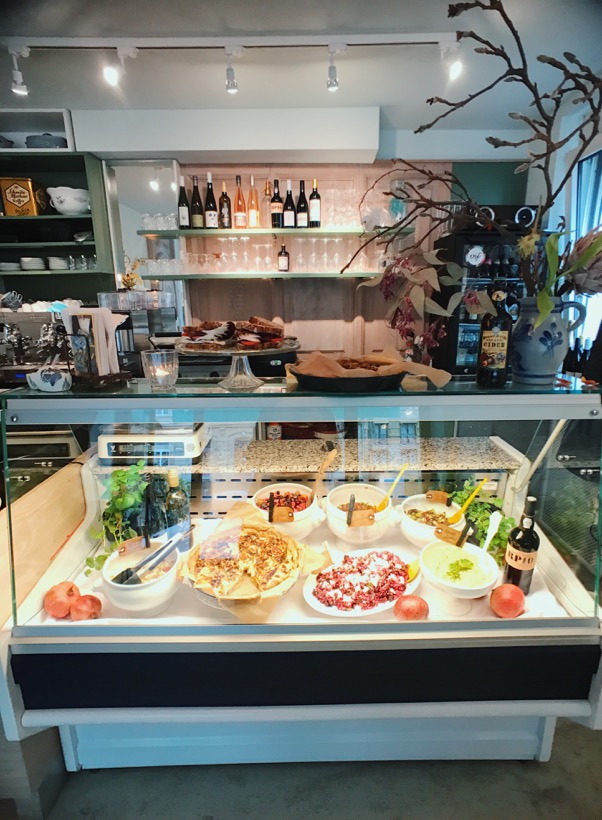 Feast your eyes on the prize!

Louise says that Frankfurt is a modern city and that the people here have good money to spend on good quality food. Ironically though, the concept is kind of missing in Frankfurt. Sure, I can give you a list of a handful of places where you can get this sort of food, but you’ll have to go great distances across the city for it. I personally believe the market for ‘foodie’ food exists in Frankfurt and Vif can fill that niche. 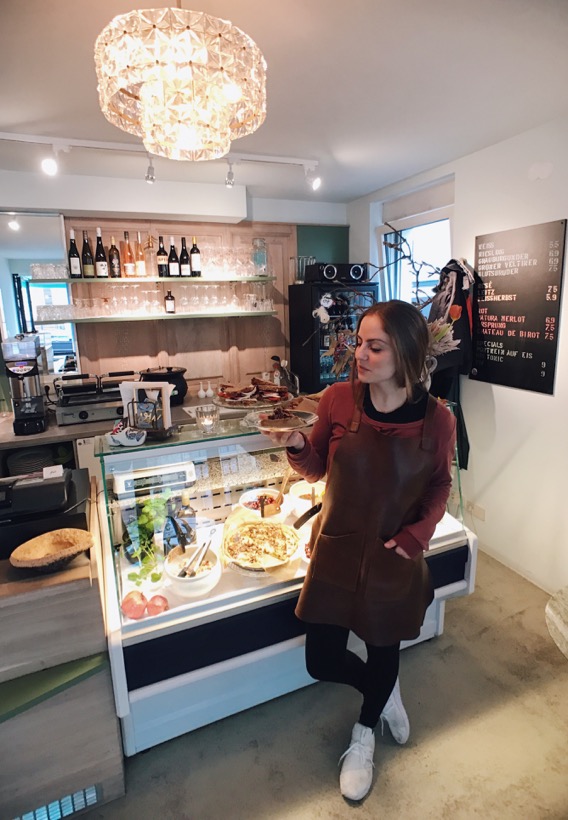 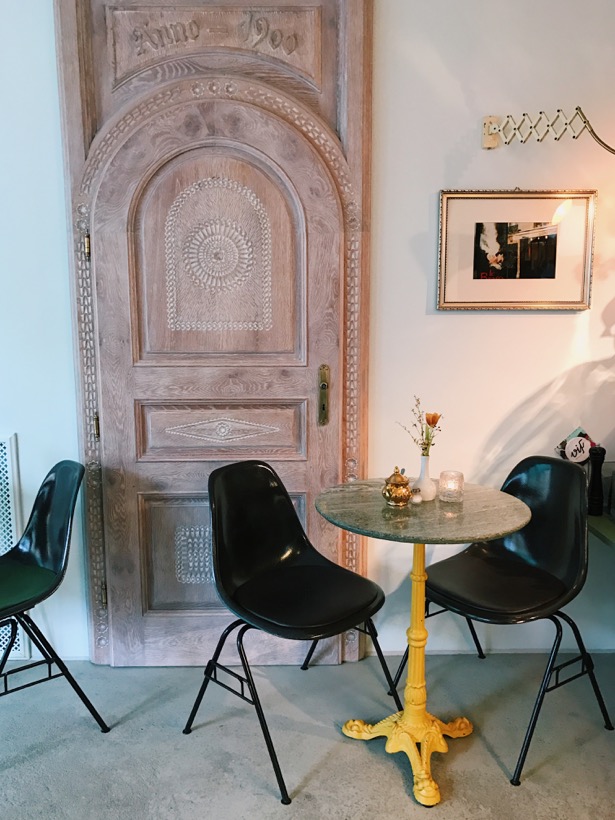 I love what she did with the interior. Apparently before this, it used to be an old takeaway pizza joint.

The other thing is, you can easily get an okay salad at chains like Heidi and Paul or Dean and David – but really, isn’t it nicer to walk into a cafe which is solely owned by a young, local business owner? I choose to eat here two to three times a week because her food is great, as is the atmosphere but also because my money has a greater impact on the authenticity and excitement-factor of my city when I choose to support small business owners. 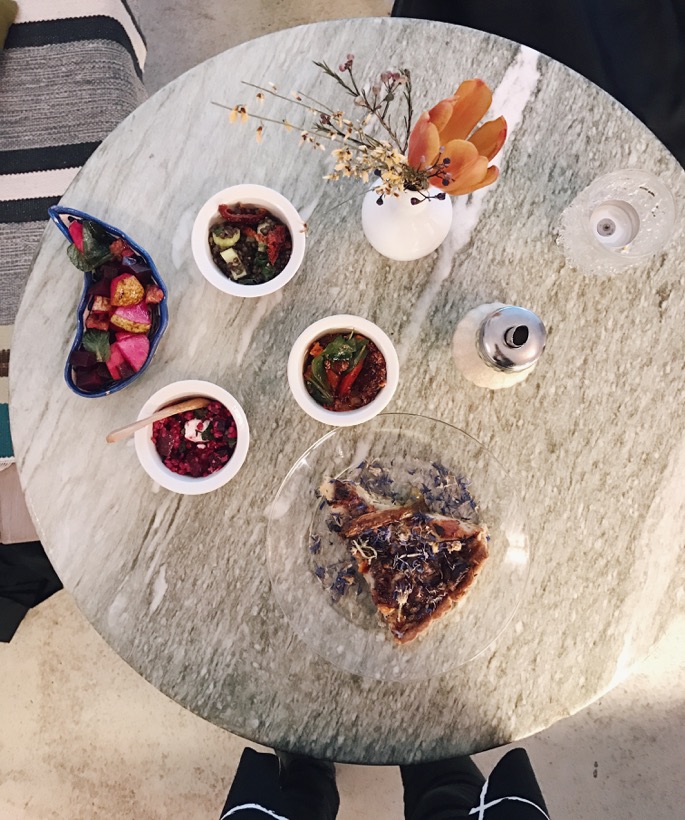 Yes I usually eat this much – but it’s because I like to ‘stay and work for a while’. 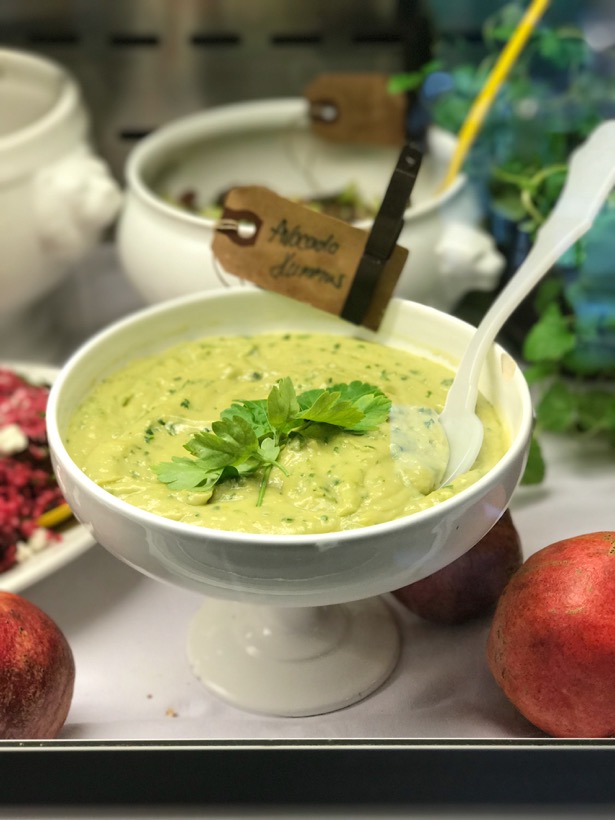 A lashing of this avocado hummus goes beautifully on top of your salad.

Every meal you’ve seen in these pictures has been made that very day, in the morning. I asked Louise and she told me that her ingredients are all organic too. Extra brownie points! 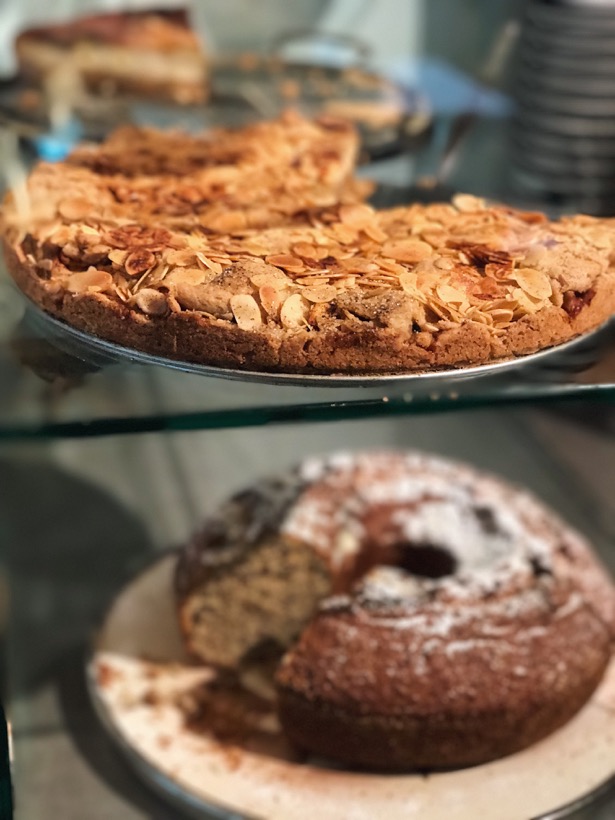 Daily made cakes – all used with spelt flour.

I should probably point out that the opinions expressed on this post are 100% my own. I haven’t been paid or coerced into writing this post. (No, I wasn’t even given a free slice of tart!) Its production comes from the fact that I’m very vocal about eating well and I believe Frankfurt could be a better ‘food’ driven city. 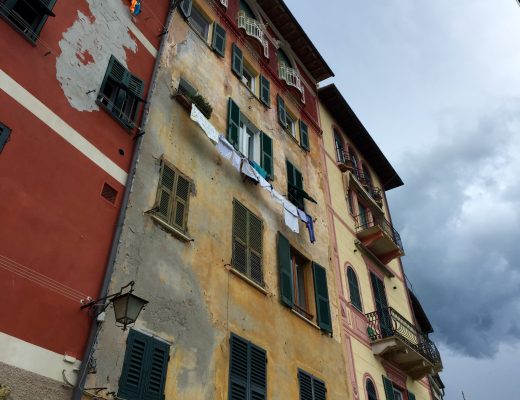 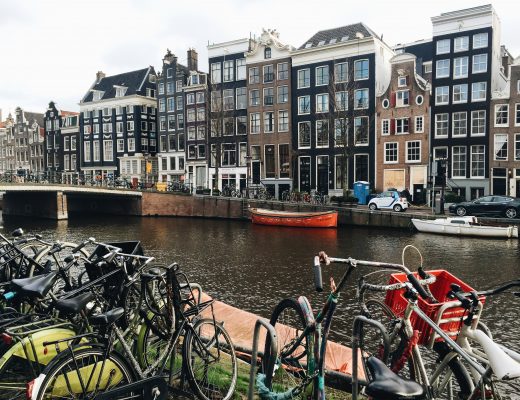 Where to eat and drink in Amsterdam; Holland: The Netherlands 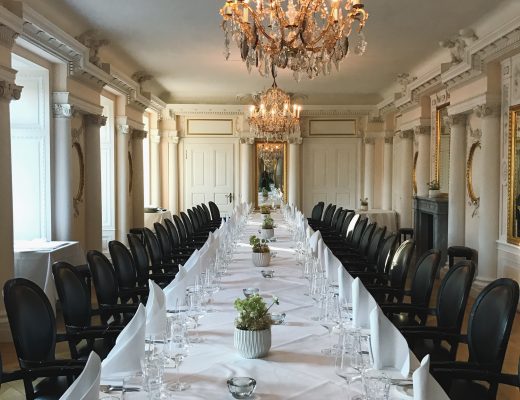